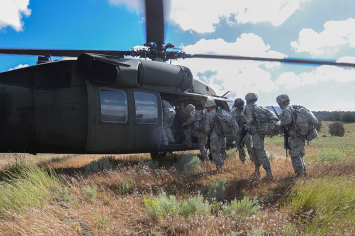 April 11, 2018 (San Diego)— Governor Jerry Brown has approved a request from President Donald Trump to send National Guard troops to the international border, funded by the federal government to combat “lawlessness,” according to the President’s request.

But in his response to the Trump administration, Brown indicated that the 400 troops sent by California will be utilized not for immigration enforcement, but rather for “new staffing will allow the Guard to do what it does best: support operations targeting transnational criminal gangs, human traffickers and illegal firearm and drug smugglers along the border, the coast and throughout the state,” threats that are priorities for both Democrats and Republicans, including two prior administrations, Brown noted.

Brown explained his rationale further. “Here are the facts: there is no massive wave of migrants pouring into California. Overall immigrant apprehensions on the border last year were as low as they’ve been in nearly 50 years.,” adding, “I agree with the Catholic Bishops who have said that local, state and federal officials should “work collaboratively and prudently in the implementation of this deployment, ensuring that the presence of the National Guard is measured and not disruptive to community life.”

Hopefully, the National Guard actually deployed will take it upon themselves to uphold the laws of this country, since Gov. Moonbeam will not.
Illegal and legal immigration, including refugees is the history of the united states. I yawn because Trump has a tired habit of saying meaningless, BS which he claims as factual when in Fact it is not. Presidents before him deployed National Guard troops to the border as well, yet he says no other president did. I yawn because determined, illegal immigrants will get here no matter what is done to prevent it. Same goes for the drug epidemic. Huge demand in the US, therefore a huge supply continues to cross the borders no matter what attempts there are to thwart these issues. Mostly I yawn because Donald Trump bores me. And something else, we ourselves were once considered (and still are in some people's opinions) illegal immigrants too.
YAWN! So our Lemon Grove editorial of the man that was covered in tattoos has been pulled from the regular new rolls... Im sorry but that was not important? to our safety? Or was it for a vote? We do have a problem! immigrants are crossing the boarder sure. But the gangs are taking advantage of this. A vote is a vote and I guess some political leaders need that more than safety. A poster here said to hold office in a small town is not a life long income it's a service to the community. Too Many are hidden from reality that I see everyday at my job. It grows and your are running out of land to hide the truth as it will follow you.
http://www.sandiegouniontribune.com/news/border-baja-california/sd-me-peace-index-mexico-20180411-story.html
YAWN!