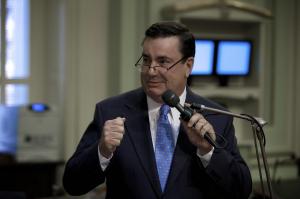 "I have two daughters...The thought that their gender could be held against their abilities is outrageous." - Senator Joel Anderson, speaking in favor of the bill on the State Senate floor

October 7, 2015 (Sacramento)- A new era is beginning for working women in California.

Senate Bill 358 by Democrat Hannah-Beth Jackson (D-Santa Barbara) expands existing equal pay law by asking employers to prove that if a man's salary is higher than a woman's at the same job, it is due to reasons other than gender.  The reasoning for higher pay for men must be based on seniority, quality or quantity of work, a merit system, or any other "bona fide factor other than sex."

The new law also protects employees from discrimination and retaliation if they ask about how much other people make (however, employers are not required to disclose this information).  In addition,  The bill also states that employees can sue if they feel that they are being paid less than someone who does "substantially similar" work.

State Senator Joel Anderson, a Republican whose district includes most of East County, voted for the bill and chided colleagues for not paying women legislative staffers equally to what men earn, as the Sacramento Bee reported.  “There’s a gender gap within our own house,” said Anderson, who urged that every woman should be able to “earn her fair share.” View his floor speech: http://anderson.cssrc.us/content/senator-anderson-sb-358

The bill passed the Senate unanimously and drew only two no votes in the Assembly.  All representatives from San Diego County voted in favor.