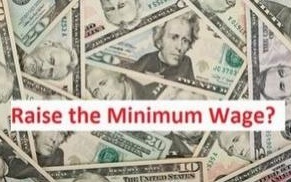 Update March 31:  Both houses osf the Legislature have passed this measure, which is now on the Governor's desk for signature and is expected to be signed into law.

March 29, 2016 (Sacramento) -- A deal hammered out by labor leaders and Governor Jerry Brown would raise California’s minimum wage to $15 an hour without the need for a ballot initiative, if it is approved by the Legislature.

Under the agreement, most businesses would phase in the increase in wages gradually over several years, starting at $10.50 in January 2017, $11 in January 2018, then rising $1 a year until January 2022, when it would reach $15 an hour.  Businesses with less than 25 workers would have an extra year to meet the new wage requirements. (View full details here.)

If enacted, the measure would make California the first state in the nation to adopt a $15 an hour minimum wage--$5 more than the current $10 rate.  An estimated 2.2 million California workers are currently paid minimum wage and would receive raises if the measure passes.

Some major cities including Los Angeles and San Francisco have already approved a $15 minimum wage.

The Governor announced, “California is proving once again that it can get things done and help people get ahead.”

But Bill Dombrowski, president of the California Retailers Association, told the Sacramento Bee that employers groups were excluded from the negotiations. He said a $15 minimum wage would force some employers to cut hours or layoff some workers.

But Rachel Warino with the California Labor Federation voiced support for the measure. In an email to union members and supporters, she wrote, “Working Californians have been struggling to get ahead for decades. We're working harder than ever but our wages haven't kept pace. Today half of California’s workers earn wages that are lower than they were 35 years ago.”

The Legislature is expected to take up the minimum wage raise proposal this week. Democrats control both the Assembly and Senate, but it is not yet clear whether they will have enough votes for passage of the landmark measure.

Assemblyman Jim Cooper, D-Elk Grove, who co-chairs a bloc of business-friendly Democrats, has said that some legislatures have questions and have not yet made up their minds. He said of the proposal, “It could affect a lot of people. It could affect nonprofits.”

of blue-collar factory jobs across America.  I am baffled as to why anyone would support more of these "free trade" that are really"multi national corporate welfare"

Of the presidential candidates, Sanders and Trump have both stood against the TPP, Trans Pacific Trade Pact, the next of the big trade deals and arguably worse than the rest.  The US Chamber of Commerce President recently said Clinton will come out for TPP after she's elected. She was for it before she was against it. Same with Cruz.

There is really no debate on the subject of the average wage described in the article. However, this bill does nothing to address the many skilled labor jobs which have been shipped overseas in the past 35 years, forcing more individuals to support themselves with minimum wage jobs. It is hard to tell who is more to blame for the loss of these skilled labor jobs, businesses who shipped the jobs overseas, or consumers who wished to buy cheaper consumer goods driving businesses to value price above all else (because there is no profit without sales). In the end, the one-size-fits-all approach to the bill (the minimum wage is the same everywhere in the state, despite the vast ranges of cost of living in the state) will doom the bill to achieving less than is hoped.