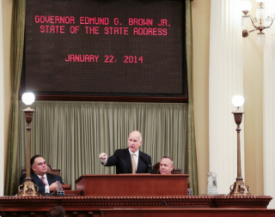 January 23, 2014 (Sacramento) – In his 2014 State of the State address, Governor Jerry Brown emphasized the state’s improving economic outlook while also pledging to “pay down our debts and remember the lessons of history.”   He also laid out a long-term water plan for the state, renewed calls for water conservation amid a drought declaration, and vowed to continue reforming school funding and battling climate change.

Bright spots are the signs of economic recovery.  “What a comeback it is,” the Governor declared. “A million new jobs since 2010, a budgetary surplus in the billions and a minimum wage rising to $10 an hour.”

He added that long-term liabilities are “enormous and growing,” citing as examples over $100 billion i9n pensions owed to state workers, as well as billions more to cover retiree healthcare, maintain roads and account for future risks such as natural disasters and uncertain costs of the Affordable Care Act.

Citing advice Joseph gave to the Pharaoh in Genesis, he called for a rainy day fund locked into the Constitution. “Put away your surplus during the years of great plenty so you will be ready for the lean years which are sure to follow,” he said, also pledging to pay down the state’s debts.

He praised enactment of the Local Control Funding Formula last year, aimed at helping districts with low-income families and those whose first language is not English.  “Those with less are going to receive more and that is good for all of us,” the Governor stated.  He also called for more control of education funding at the local level.

To address the drought, the Governor said he has convened an Interagency Drought Task Force.  “We need everyone in every part of the state to conserve water,” he reiterated.  “We need regulators to rebalance water rules and enable voluntary transfers of water and we must prepare for forest fires.”  He added that water recycling, expanded storage and serious groundwater management must all be part of the mix, along with investments in safe drinking water and wetlands/watershed restoration.

The Governor noted that vehicles use over 14 billion gallons of gasoline to travel over 330 billion miles each year in California, contributing to greenhouse gases.  He called for reducing oil consumption and working toward breakthrough technologies.

He praised the expansion of healthcare coverage to millions who lacked it before, adding that the state created a tax credit to help innovators.  California has six of America’s 12 top performing metropolitan areas in biotechnology, including San Diego.  Governor Brown wants to see California pioneer new fields of precision medicine using genomics, medical devices, computer sciences and other fields.

“California is a leader in so many ways,” he concluded. “But the dangers and difficulties we face can never be taken lightly. We still have too many struggling families, too much debt, and too many unknowns when it comes to our climate. Overcoming these challenges will test our vision, our discipline and our ability to persevere. But overcome them we will and as we do, we will build for the future, not steal from it.”

The Governor’s State of the State address drew prompt reactions from local legislators.

Assemblyman Brian Jones from Santee, who chairs the Assembly Republican Caucus, had this to say. “In spite of continuous attempts by Republicans over the years to pay down our wall of debt and create a rainy day fund, Democrats continued to take money from the people and spend every dollar, and then some.”

While Jones faults Democrats for the state’s fiscal woes in recent years, Governor Brown faulted “a lethal combination of national recessions, improvident tax cuts and too much spending” for the problems, but noted that the budget is now balanced with a Democratic-controlled Legislature.

Jones also noted the California has dropped from the sixth to ninth largest economy in the world, and faulted “failed green energy policies”  among other criticisms.

State Senator Marty Block, a Democrat from San Diego, noted that the Governor celebrated creation of a million jobs, but added, “Unfortunately a skills gap exists that keeps many of these jobs vacant.”  While the Governor addressed the drought, Block observed, “We face more than one kind of drought. Like crops in California’s Central Valley, the supply of highly sought after, highly skilled workers has dried up in many parts of the state.”

Block’s solution? “We must rain resources on workforce development and community college programs that could end the drought of highly skilled workers threatening California’s future. Such rain is necessary for the growth of our economy.”