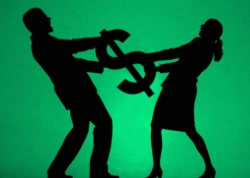 “Putting our fiscal house in order is necessary if we are to engage in the planning and long-term investments in areas like infrastructure, education and 21st century job security,” said Speaker John Perez, “and even though this budget contains many difficult decisions, it puts us on a pathway to begin reinvesting in opportunities for Californians.”

Democrats by law in California cannot pass a budget that includes tax increases, since that would require a two-thirds majority—and the Republican party opposes all new taxes or even closing tax loopholes, such as Assemblyman Marty Block’s failed bill that would have closed loopholes for profitable corporations that offshore assets while paying zero taxes in California.

Thus this year’s budget relies in part on the Governor’s proposed November ballot initiative as a source of new revenues.  If passed by voters, the constitutional amendment would  impose a slight raise in sales and use tax as well as income tax on a temporary basis.  The ballot measure would raise an estimated $8.4 billion for this budget year—including $2.9 billion for schools and community colleges, as well as permanently dedicating revenues to local governments to pay for public safety programs under the 2011 realignment program that shifted more responsibilities onto local municipalities. The ballot measure would also infuse monies into the state’s general fund.

According to the Legislative Analyst’s office, if the ballot measure does not pass in November, additional “trigger” cuts in spending will kick in.  The trigger cuts would include large reductions in K-12 and community college education as well as the University of California and Cal State University. Cal-Fire would also be on the chopping block for trigger cuts, as would public safety programs, developmental services, local water safety patrols and flood control programs.

The $16.2 billion budget includes $8 billion in cuts, according to the Legislative Analyst’s office.  The budget mostly follows the Governor’s proposal, though Democrats pared back some of the deepest cuts.  Budget priorities include education and public safety, with significant cuts made in health and human services.

Notably, the Governor wanted to cut off child care and cut grants for parents who don’t find a job under the CalWORKS welfare-to-work program; Democrats felt those consequences were too severe during a time of 10.8% unemployment.   Democrats trimmed Cal-Wrosk cuts from $880 million to $428 million and also reduced major cuts in child care.

Other cuts scaled back by the Legislature include in-home supportive services  and Cal-Grants for students.

Assemblyman Brian Jones (R-Santee) criticized the budget, citing the Assembly Republican Caucus’ “California Budget Fact Check” as his source. “Less than $1.1 billion of the items characterized as `cuts’ are true permanent spending reductions,” he said, noting that nearly $400 million of the permanent cuts are continuations of the previous year’s policies and that `cuts’ also including funding shifts, deferrals and delays in program increases. Republicans contend that spending will continue to increase by some $12.5 billion under the Democrats’ budget.

Assemblyman Marty Block (D-San Diego) said there were “no cries of triumph and little consolation” as legislators voted to pass the budget, due to many deep cuts. But he added, “I was absolutely unwilling to avoid my responsibility to make cuts in order to balance the budget….The best thing about this budget is that it should be the last of its kind….Today’s responsible fiscal action should enable us to begin rebuilding our economy and restoring the luster of the Golden State.”

Block, who chairs the Assembly Higher Education Committee, called slashes to Cal Grants budget “the unkindest cut of all” but noted that the Legislature did reduce $292 in cuts to Cal Grants proposed by the Governor down to $55 million, with cuts only applicable to future Cal Grant recipients of the higher education student financial assistance program.

The budget has some good news for college and university students, freezing tuition at the  University of California and California State University. “This means NO TUITION INCREASE in 2012-2013,” the UC Students Association posted n its Facebook page. “This was a top priority for students and students helped make it happen.”

The freeze is contingent on passage of the Governor’s ballot initiative in November, however; failure would likely mean a new boost in tuition that has also seen several hikes in recent years.

State Superintendent of Public Instruction Tom Torlakson praised lawmakers for supporting education and minimizing cuts to preschool and child care programs, as well as rejecting a proposal to shift oversight of these programs away from the Department of Education.

“Despite the state’s deep fiscal challenges, California lawmakers have done their best to uphold the principal that every child deserves to start life with a chance to learn and grow—no matter where they happen to live,” Torlkason concluded.