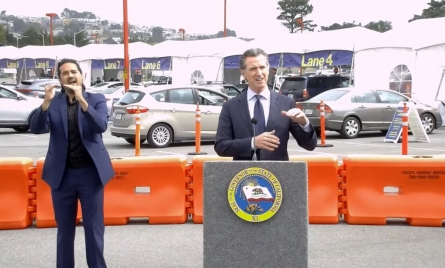 April 7, 2021 (San Diego) - Marking a major step in a return to normalcy, Gov. Gavin Newsom announced Tuesday that all COVID-19 restrictions on businesses, gatherings and recreational activities will be lifted June 15, although a statewide mask mandate will remain in place.

“We are seeing bright light at the end of the tunnel,” said Newsom at a press conference outside of a vaccination site in San Francisco.

Newsom said the June 15 reopening assumes continued availability of vaccines and no spikes in COVID-19 hospitalizations. On that date the state will do away with its Blueprint for a Safer Economy, the four-tier, color-coded system that has guided economic reopening through a series of restrictions and capacity limits.
The governor also announced that the state had reached 4 million vaccinations among low-income communities, allowing a number of counites, including San Diego, to move from the red to orange tier.
“San Diego is officially moving into the ‘orange tier,’ yet another significant step in our recovery from COVID-19,” said county Supervisor Nathan Fletcher, who confirmed the new status effective on Wednesday.
The reopening announcement comes as the state crossed the 20 million threshold for the number of vaccinations administered. Over 1 million vaccines have been administered in San Diego County.
“The vaccine has given us a path to save lives, restore our economy, send our kids back to school and get our way of life back,” said Fletcher.
The orange tier allows restaurants, move theaters, gyms and places of worship to increase capacity. In addition, breweries and wineries can reopen at limited capacity indoors, and bars that don’t serve food can open outdoors. Fletcher said the county would also end the 10 p.m. curfew on restaurants.
California Health and Human Services Secretary Dr. Mark Ghaly said the June 15 date was chosen for being two months after COVID-19 vaccines are made available to all Californians aged 16 and over. And the decision to lift all the blueprint requirements comes in response to rising vaccination numbers and continued decreases in all key pandemic-tracking metrics, such as case numbers, positivity rates and hospitalizations.
“With all of that, we are at the stage where we’re ready to consider the next aspect of our pandemic response,” Ghaly said. “The road to this moment hasn’t been easy. We have come together as Californians to save thousands of lives.”
Infections are rising in other parts of the country, with some of the outbreaks linked to new variants of the virus. But California has been able to keep its positivity rate under 2% for several weeks now.
Ghaly said scrapping the blueprint — which will be done statewide, regardless of where individual counties may be ranked at the time in the tier system — “really means that every day activities will be allowed, and businesses can open with common-sense risk-reduction measures.”
“This means the end to our color-coded tiers,” he said. “You can go to movies, to the beach and see family.”
Ghaly stressed, however, that a statewide mask mandate will remain in place “to prevent illness and promote health.”
Newsom races a likely recall election later this year, and the Republicans seeking to succeed him quickly criticized the governor’s reopening announcement.
“Gavin Newsom’s unscientific COVID-19 restrictions have led to crippling job losses, countless businesses closing their doors permanently, and students across this state losing an entire year of in-person education,” said former San Diego Mayor Kevin Faulconer. “Newsom has shown that he’s only motivated by his own political survival, not doing what’s best for Californians.”
CalMatters and City News Service contributed to this article.