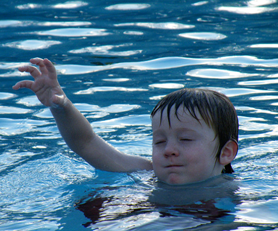 Drowning is currently the leading cause of death for children ages 1 to 4 in Califorinia.  Drowning is a silent killer and only takes less than a couple minutes. Hospital records in California show for every fatal pool drowning there are five other near-drowning incidents resulting in hospitalization, with brain injury due to asphyxiation (lack of oxygen to the brain) being the main cause of the hospitalization.

From 2010 to 2014, over 160 toddlers died of drowning in our state,  From 2010 to 2016, another 740 children suffered a near-fatal drowning resulting in hospitalization and brain damage, according to California’s Department of Public Health EPICenter and the national Center for Disease Control’s WISQARS[i] injury data systems

The initial hospitalization care and cost is $5 million for one such brain injured child.

The California Department of Developmental Services (DDS), which provides care and treatment for individuals with serve brain damage, reported that in December 2016 there were 770 clients receiving care due to near-drowning brain damage. DDS near-drowning clients who need to be institutionalized due to the extent of their brain damage, costs $30,000 a month for care and treatment. Drowning and near-drowning is a huge cost not only regarding the loss of a young life and to their families, but it also has a major impact on California’s healthcare systems, special education programs, but also to the California taxpayer.

“We want to thank Governor Brown for signing model legislation aimed at reducing childhood drowning in California,” states Brad Wenger, President of Association of California Life and Health Insurance Companies, and Chair of the California Coalition for Children’s Safety and Health (CCCSH). “And, we want to thank Senator Josh Newman (District 29 – Orange County) and Senator Nancy Skinner (District 9 – Contra Costa County) for authoring and co-authoring the legislation, with leadership from the Drowning Prevention Foundation, and support from the Health Officers Association of California (HOAC), American Academy of Pediatrics (AAP), California Pool and Spa Association (CPSA), and Safe Kids International and California Branches. Lastly, we would also like to thank the many parents and families who have lost children due to drowning, for sharing their child’s drowning story to help explain how backyard pool drowning happens.”

Toddlers ages 1 to 4 years old have gained a lot of agility and are naturally drawn to water. Even when a pool is closed, not being used, they will gain access to the pool unless blocked, and often times that is not a pool located at their home. It is when they gain access to a pool unsupervised by a responsible adult; they are very vulnerable to drowning.

“The layers of safety protection provided in SB 442 would have made a difference in all of these childhood drowning incidents examples,” a press release from the California Coalition for Children’s Safety and Health states.

The Coalition has provided personal stories of parents who  agreed to share their child’s drowning stories to help other parents, caregivers, pool owners and policymakers understand how important it is to have layers of protection when it comes to pool safety--and why it is incorrect to assume parents hold all of the responsibility for protecting their children from drowning in residential pools: