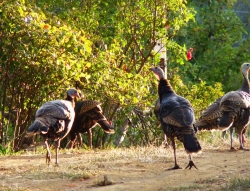 “This new law provides a low-cost opportunity for those who are interested in hunting to be able to explore the sport with another experienced individual,” said Hollingsworth. “With passage of this bill, Californians will be able to join licensed hunters in this time-honored activity, a sport and a pastime with deep roots in our nation’s culture.”

SB 1179 allows novice hunters, under conditions approved by the California Department Fish and Game, to hunt up to two days per year when accompanied by experienced, licensed hunters. The bill was supported by groups ranging from the National Rifle Association to Sierra Club California.

“Responsible, licensed hunters provide tremendous means for wildlife conservation in California. Hunters are correctly said to be the original conservationists. Therefore, bringing more hunters into the fold isn’t just good for the continuance of the sport, it’s essential for conserving wildlife,” said Hollingsworth, whose district includes most of East San Diego County as well as southern Riverside County.

Hunters spend $21 billion dollars a year nationwide, often spending their money for food, supplies, and lodging in rural areas that have been hard hit during the current economic recession. SB 1179 encourages the growth of responsible sport hunting in California, expanding economic opportunities for many areas that continue to be wracked by record high unemployment.

A Senate Appropriations Committee analysis estimated that the measure would cost the state $180,000 in lost revenues from hunting licenses and an additional $130,000 in enforcement costs on the free hunting days.

That is all we need, more untrained hunters. The supposedly trained ones are bad enough. Example: Last year one great turkey hunter couldn't tell the difference between my house and a turkey. Shot through my windows, doing over $1,000 worth of damage. And, of course, he/she was trespassing on my property. And they call that "sporting." There are so many turkeys on my property the I could just sit on my front porch in my rocking chair and shoot dozens of them. BAH!