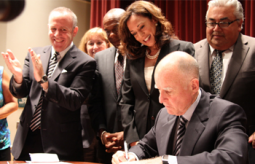 July 11, 2012 -- Marking a major milestone for Californians and all Americans, the Homeowners Bill of Rights, a package of bills sponsored by Attorney General Kamala D. Harris that gives homeowners important new protections and places restrictions on how aggressively banks can foreclose, was signed into law today by Governor Brown.

As Attorney General, Kamala Harris has made homeowner protection a cornerstone of her first year-and-a-half in office, and today's announcement further solidifies her commitment to ensuring transparency and fairness in the home-owning process.

The new laws, which will go into effect on January 1, 2013, are the first in the nation to be enacted into law since the nationwide mortgage settlement reached earlier this year.  Through those negotiations, AG Harris secured up to $18 billion for California homeowners from the nation's five largest banking institutions.

"These new laws will help responsible California homeowners keep their homes and avoid unnecessary foreclosures," said Attorney General Harris.  "We have done something that is the right thing to do."

To learn more about how the Homeowners Bill of Rights impacts Californians, click here.