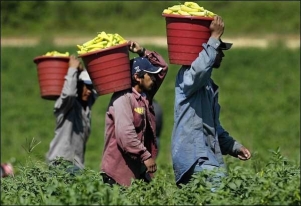 September 12, 2016 (Sacramento) -- Legislation authored by Assemblywoman Lorena Gonzalez (D-San Diego) to establish overtime standards for farm workers in line with other Californians was signed into law today by the Governor.

Gonzalez announced, “This is a truly historic day in California. Thanks to an incredible coalition of workers, lawmakers, labor, environmentalists and individually committed Californians, we have finally righted a 78-year wrong for farm workers.  The hundreds of thousands of men and women who work in California's fields, dairies and ranches feed the world and anchor our economy. They will finally be treated equally under the law. It is a good day.”

Beginning in 2019, Assembly Bill 1066 will gradually phase in standards for farmworker overtime lowering the current 10-hour day level to the standard 8-hour day, and establishing for the first time a 40-hour standard workweek, over a four-year period. Beginning in 2019, the phase-in will be by annual half-hour-per-day increments until reaching eight hours, and annual five-hour-per-week increments until reaching 40 hours. Both final standards will be achieved in 2022, with small farms employing 25 or fewer people receiving an additional three years to comply.

AB 1066 additionally authorizes the Governor to temporarily suspend a scheduled phase-in of overtime at any time until full implementation of phase-in overtime requirements or January 1, 2022, whichever comes first, if the Governor suspends minimum wage increases based on economic conditions.

In 1938, Congress passed the Fair Labor Standards Act (FLSA), which established the minimum wage, recordkeeping, child labor standards and overtime pay eligibility. However, the FLSA failed to include agricultural workers throughout the United States, and in 1941, the state Legislature officially exempted all agricultural workers from statutory requirements of overtime. In 1976, Governor Jerry Brown signed legislation establishing a modified standard for these workers still in effect today, with a 10-hour day and 60-hour week. Those 40-year-old overtime thresholds for agricultural workers haven’t been updated since.

In March, legislation to normalize overtime rules for California farm workers received strong backing in a letter from former Secretary of State Hillary Clinton, who said, “it reflects our shared commitment to fair and humane working conditions for those whose labor feed our nation and much of the world.”

In 2014, California’s farms and ranches brought in $54 billion in revenue. More than 90 percent of California farmworkers are Latino and more than 80 percent are immigrants. Recent data also found the median personal income of California farm workers to be just $14,000.

And, will E-Verify be required to continue their employment?