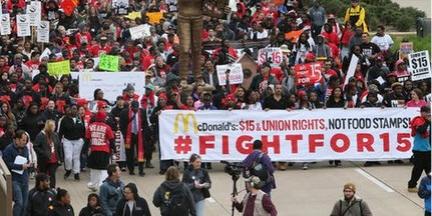 April 5, 2016 (San Diego’s East County) – Governor Jerry Brown has signed into law a bill that will raise California’s minimum wage to $15 an hour by 2022.  The increase will be gradual, with the minimum wage going up from $10 an hour to $10.50 next January, $11 the next year, then rising by $1 a year, after which raises would be tied to the cost of living.  Small business will have an extra year to comply and the Governor could waive increases in bad economic times.

The action aims to help struggling workers in California, which has a high cost of living, and has the backing of labor unions. The impact will be substantial in communities like El Cajon, a city that has the highest poverty rate in San Diego County as well as many recent immigrants, most from Iraq.

But it adds extra costs to businesses—and that’s got some small business owners and their representatives concerned. Locally, two business groups representing Iraqi Chaldean-Americans have split on the issue, with one opposed and the other in support of the minimum wage hike.

Ben Kalasho, president of the Chaldean American Chamber of Commerce, says that while his organization supports some increase in the minimum wage, “we vehemently oppose the rate of increase and the phasing methodology.”  The Chaldean American Chamber instead pushed for a 25 cent a year raise for three years, followed by a 50 cent raise for three years.

Kalasho argues that a dollar a year rise will “cripple our recovering economy,” adding, “Employers will not be able to afford the demand of the new wage increase. Especially since employers are just now becoming accustomed to and in compliance with the Affordable Care Act.”

But supporters of the law have argued that businesses ultimately can benefit from the law, if consumers with higher incomes spend more money on goods and services that small and large businesses provide.

The Neighborhood Market Association, which represents primarily Chaldean-owned businesses, has announced that it supports the new law raising minimum wage to $15 an hour.

“To us, this is not a political issue. It’s an American issue,” Mark Arabo, head of the Neighborhood Market Association, states in a press release. “We need to ensure that every parent who is working full time is able to support themselves and their children. After seeing the positive impact of raised wages throughout the United States, it is becoming clear that this bump is overwhelmingly positive for small business owners and employees alike.  As one of the largest small business associations, we applaud Governor Brown’s decision to make a $15 minimum wage raise law.”

He concludes, “We need to do more to protect families whose only intention is to provide for themselves and their loved ones. The $15 an hour minimum wage is a step in the right direction for working families throughout California.”