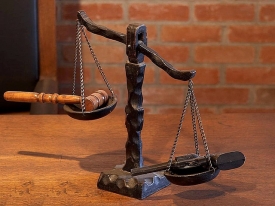 The Governor vetoed 11 crime-related measures, objecting to the fact that each bill would “criminalize conduct that is already proscribed.”  Among the bills rejected was one that would have made it a felony to possess date-rape drugs with intent to commit a sexual assault.

A week after a gunman killed nine people at a college in Oregon, Brown signed into law a measure banning the carrying of concealed w4eapons on all school and university campuses in California, except when school officials have granted permission or if the carrier is retired from  law enforcement.

The bill was backed by the Brady Campaign to Prevent Gun Violence, which believes the measure could save lives.  It was opposed by the National Rifle Association, which contends it raises Second Amendment concerns by restricting rights of law-abiding, licensed and trained people to carry a firearm for self defene.

Brown took action on two measures that aimed to protect immigrants with low-level drug offenses from deportation, signing one and vetoing the other.

California law allows anyone arrested for a minor drug offense such as smoking marijuana to plead guilty, complete voluntary drug treatment and then have the conviction removed off their record.  But under federal law, that guilty plea still counts as a conviction that can lead to mandatory deportation for an immigrant – even a legal immigrant with a green card.

Assembly Bill 1351 would have eliminated the requirement to plead guilty before entering drug treatment.  But Governor Brown vetoed that measure, saying it “goes too far.”  However he signed a companion bill, AB 1352, that lets people who complete drug treatment to withdraw their guilty pleas if they face deportation or a job loss.  But clearing a record can take over a year, so immigrants will still be vulnerable to deportation during that waiting period.  Human Rights Watch has criticized the Governor, insisting that “both bills were needed.”

Governor took a very good decision of not allowing guns in the college campus, since crime is increasing day by day. Also the decision of protecting immigrants would prove beneficial. According to convention collective nationale immigrants should no the law so that they won't get exploited by anyone in their destination country.