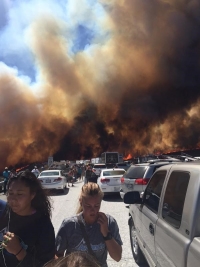 The devastating North Fire mushroomed out of control, leaping across I-15 in San Bernadino County earlier this year after drones interfered with firefighting aircraft, forcing them to land to avoid collisions.  The fire burned numerous vehicles on the freeway and swiftly spread to do widespread damage.

On the East Coast, prison officials intercepted a drone attempting to drop contraband over a prison ground.  Some education advocates had also sought to protect the privacy and safety of students from drones.

In his veto statement, the Governor objected to creating a “new crime” at a time when jail and prison populations are overflowing.    Brown indicated that there are already laws on the books that can address the problems raised by the bills.

But Senator Ted Gaines, who authored the measure to criminalize flying drones near firefighting planes at the request of Cal-Fire, voiced disappointment in the veto.  On Twitter, he concluded, “Our laws must keep up with growing drone tech or else all of our safety is at risk.”