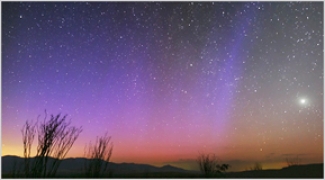 July 1, 2009 (San Diego)--Faced with the prospect of closing 220 state parks, including two in East County (Anza-Borrego Desert State Park and Cuyamaca Rancho State Park), the California Legislature passed a bundle of tax and fee increases by a simple majority, though a two-thirds majority is required to raise taxes. Governor Arnold Schwarzenegger has vowed to veto the budget, which did not meet the two-thirds majority due to lack of Republican support for tax increases on tobacco, alcohol and other items proposed by Democrats.

Dennis Hollingsworth, State Republican Leader, argued, “By waiting until the last hour, Democrats have brought us to the brink and still refuse to solve the $24 billion problem everybody knows we have. This is not what the people of California want, it’s not a fix.”

Dairy producer Knudsen has pledged to support California State Parks. The company will donate a portion of proceeds to the California State Parks Foundation for every product they sell, up to $100,000, until September 6. Knudson also offers volunteer opportunities in the state park system through their website.

The Save Our State Parks Campaign offers various ways to stand up to the proposed park closures. To learn more information, visit: http://www.savestateparks.org/.

To air your views on the proposed park closures, you can contact Governor Schwarzenegger’s San Diego office at 619-525-4641, or find a list of legislators and their contact information at our Sound Off! Section: http://www.eastcountymagazine.org/?q=0809soundoff.

Ryan Lescure is a communications major at San Diego State University and an intern with East County Magazine.