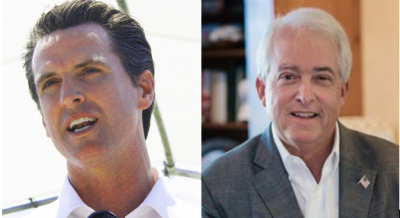 June 8, 2018 (Sacramento) – Republican fears of being shut-out of the gubernatorial race in California did not come to pass. The November run-off election will pit Lieutenant Governor Gavin Newsom, a Democrat, against John Cox, a Republican businessman.

The two have dramatically different visions for California's future, giving voters a clear choice.  Having a Republican on the top of the ticket is also expected to help the GOP with turnout in November, a factor that could help the party's down-ticket race candidates as well in California, a state dominated by Democrats who currently hold every statewide office and control both houses of the Legislature.

With all primary ballots tallied statewide, Newsom has nearly 1.4 million votes, or 33.4% out of a crowded field of candidates. Cox has just under 1.1 million votes, or 26.2%.  The next closest candidate, Democrat Antonio Villaraigosa, has 558,000 or 13.4%. While some mail-in and provisional ballots remain to be counted, as well as 118,000 voters left off the rolls in Los Angeles due to a system glitch, the top two competitors’ leads are solid enough to assure victory.

Cox, a business leader in food service manufacturing, says he wants to make California more business friendly, roll back taxes and on day one, repeal the sanctuary city laws to enable deportations by the federal government of more undocumented immigrants. He also wants to repeal the gas tax hike.

Newsom raised over $27 million in the primary race, nearly all of it from small donors.  Cox raised just under $5 million, but only 8% was from donors giving $200 or less; the rest came from wealthier donors and his own money.

Cox has been endorsed by President Donald Trump, while Newsom has pledged to fight the Trump agenda and stand up for what he calls "California values."

Read more about Gavin Newsom at his website: https://www.gavinnewsom.com/

Read more about John Cox at his website: https://johncoxforgovernor.com/