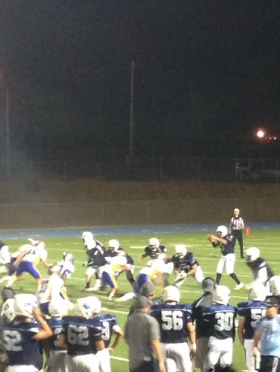 November 10, 2016 (El Cajon) - In the first round of CIF playoffs, it was the battle of the Eagles as the San Pasqual High Golden Eagles traveled to Granite Hills to take on the Eagles.

The non-colored Eagles got on the board first with senior Bryce Strickland’s field goal to make the score 3-0 Granite Hills.

The Eagles piled on in the second quarter.  Junior Jacob Siegfried kept it on the quarterback keeper and got the one yard touchdown.  The PAT was blocked and it was 9-0 Granite Hills.  On a first down, Siegfried aired the long ball to senior Mashal Wasimi who ran it the rest of the way for the touchdown.  This time, Strickland made the point after and the Eagles led 16-0.

In the second half, San Pasqual got on the board with junior Westin Erdman’s pass to senior running back Sam Serrato for the touchdown.  The PAT was good and the score was 16-7 Granite Hills.  But the non-colored Eagles pulled further away with junior Seth Allister’s long touchdown run.  23-7 Eagles after the PAT.  Serrato didn't like that.  Late in the third, he ran 55 yards untouched for another San Pasqual touchdown, cutting Granite Hills’ lead to 23-14 after the extra point.

In the fourth, Siegfried and Wasimi connected again, this time on an 81-yard pass play for a touchdown to make the score 30-14 Eagles.  Granite Hills held strong and won against their fellow, albeit colored, feathered friends 30-14 and advance to the next round of the CIF playoffs.