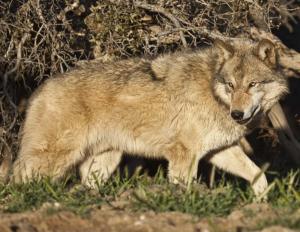 June 8, 2013 (Julian) – The U.S. Fish and Wildlife Service released its proposal this week to remove Endangered Species Act protections for gray wolves across most of the country. Only the Mexican gray wolf, a subspecies of which only about 75 exist in the wild in Arizona and New Mexico, would retain federal protections. Without federal protections, states can decide whether to protect wolves or remove or reduce populations that begin to establish.

“This proposal is bad news for wolves still on the path to recovery, including in California,” says Patrick Valentino, director of California wolf recovery efforts for the California Wolf Center in Julian, a nonprofit wildlife conservation, education and research center that has been working to reestablish gray wolves to their native habitat. “Wolves have a long way to go before they are fully restored to their crucial role on the landscape.”

After widespread extermination by humans during the late 18th and 19th centuries, wolves were protected under the Endangered Species Act and reintroduced into the Northern Rockies in the mid-1990s. Populations grew successfully and began to expand into neighboring states such as Washington and Oregon. Wolves in the Northern Rockies and Great Lakes regions were delisted in 2011 and 2012.

The delisting would include states with significant suitable wolf habitat that is still unoccupied by wolves, including California, which in late 2011 documented its first wolf in the wild in almost 90 years. Gray wolves once roamed across much of the country and currently occupy less than five percent of their historic range.