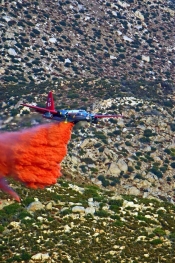 October 3, 2011 (Julian)  Update 7 p.m.- The Great Fire is 65 percent contained this evening and holding at 2,000 acres, the same size the wildfire has been estimated at since yesterday morning.

Winds are blowing at 10 mph out of the southwest, with gusts of 17 mph, Cal Fire Batallion Chief Nick Schuler reports, adding that there is an increase in cumulous cloud build up and an anticipated increase in wind speeds.  Progress is being made in all divisions, he added.

Although more than 1,100 homes in the Julian order were placed on standby for possible evacuation yesterday, no evacuations were ordered, Cal Fire's Roxanne Provaznikconfirmed.

Cause of the fire remains under investigation and cost for fighting the blaze is over $650,000.

Sign up for free Viejas Wildfire and Emergency alerts via e-mail at the top right side of our homepage.  You can also receive a free weekly copy of East County Magazine with in-depth coverage of news and events in our region.

We also offer brief text alerts via e-mail by following ViejasAlerts on Twitter.com. We recommend all of the above since you don't know what will be working in an emergency.