August 16, 2019 (La Mesa) -- La Mesa City Council members voted unanimously 5-0 on August 13th for a landmark agreement to form a joint powers agreement (JPA) with the cities of San Diego and Chula Vista to create a Community Choice Aggregation (CCA) and give La Mesa residents an alternative to SDG&E for purchasing power.

La Mesa Vice Mayor William “Bill” Baber was on the subcommittee leading the efforts on this matter. “With this vote, La Mesa took another step forward on the path to 100% clean energy!” Baber told ECM via e-mail. 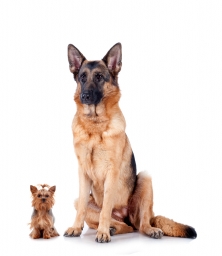 “Our new regional JPA with San Diego and Chula Vista will get economies of scale that benefit our rate-payers,” says Baber, who adds that he hopes Santee will  also vote to join the JPA. “We will share staff costs, plus the purchase power of our regional JPA is much bigger than La Mesa alone.” Then he quipped,”I may be a little Yorkie, but I look big in a pack with a German Shepherd!” (He sent the photo, right, to illustrate his point.)

Councilmember Colin Parent noted his support for an enforceable climate action plan was part of his campaign platform.

“I ran for city council on a promise that La Mesa would adopt an enforceable climate action plan,” said Parent via email.  “This week’s vote for a clean energy future for La Mesa is a step toward implementing that important plan.”

Parent, during the meeting, explained that his father and family had a long employment history with SDG&E.

La Mesa residents will have an option to opt out of the CCA and continue buying their power from SDG&E if they choose, but historically when CCAs have formed elsewhere in California, only a small fraction of ratepayers choose to stay with commercial utilities. Baber says La Mesa will meet its climate action and greenhouse gas emission reduction goals if at least 80% of residents stay in the CCA.

In March of 2018 the Council approved a climate action plan (CAP) that set the course to reduce community-wide greenhouse gas (GHG) emissions by 53% to achieve 100% renewable electricity by 2035.

In January 2019 the Council approved resolution 2019-008 that gave the go-ahead for the city to enter into a cost share agreement with the city of Chula Vista to complete a CCA technical feasibility study. The cost share was not to exceed $23,000 and was later joined by the City of Santee.

The city of La Mesa began negotiations with the city of San Diego, with stakeholders, to launch a regional CCA JPA (Regional CCA JPA).  The CCA JPA will manage the procurement and management of energy on behalf of JPA member cities. The city had to pass an ordinance by next month to join the JPA.

The Public Utilities Commission estimates that by 2025, 85 percent of municipalities will be served by third party energy providers such s CCAs.

The feasibility study examined several options and found that under every scenario, ratepayers in cities that join the JPA to form the CCA are likely to pay slightly less than current SDG&E rates: 2 percent less if the JPA launches with up to 75% renewable electrical energy on day one, or 1 percent if it launches with 100% electricity from renewable sources. Risks were also examined and found to be manageable.

Cody Hooven, Chief Sustainability Officer for the City of San Diego, addressed the Council. “We really feel a regional JPA is the best model,” she said, adding that this could be the second largest CCA in California, saving the member cities and ratepayers substantially over the next decade.

Council member Kristine Alessio  said she wants to be sure that “La Mesa ratepayers will get our fair share of the profits.”  Hooven assured her this will happen.  Baber explained that the weighted vote for the JPA will be “much better than SANDAG or MTS.”

Council member Akilah Weber said she wants to see future discussion in the JPA to provide local jobs and assure that clean energy will be locally produced in the San Diego region.

Jean Costa, an environmental activist with 350.org, praised the council but also called for a citizens advisory committee to oversee the JPA, a sentiment echoed by several Council members.

Speakers from the public unanimously praised the Council for moving forward on a CCA.  Even Joseph Britton, public affairs manager for San Diego Gas & Electric Company (SDG&E), said, the company has been a “supportive partner” of whatever choice the city makes and looks forward to a “continuing partnership” to continue handling infrastructure and billing under  JPA as well as being a “power producer of last resort.”

After Baber motioned to approve La Mesa joining the JPA to bring a community choice energy option to La Mesa residents and the Council unanimously voted approval, the audience applauded, ushering in a green new future for La Mesa.