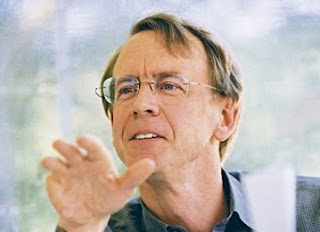 Republished with permission from her blog http://www.missiontohumanity.com

One of my favorite Venture Capitalists, John Doerr, is looking for that clean tech killer app that startles and then sends the thundering herds of start-ups across the wetland plains of Silicon Valley--that bullish scent, that feverish Valley buzz, the gridlock on highway 101--and those returns! These signals will be the hallmarks of the coming Green Rush, as it will become known, at least by me, when the clean tech sector really, really arrives in Silicon Valley and in other clean tech clusters in places like San Diego County.

The race will really be on then, one that creates prosperity again and truly saves civilization, along with our co-habitating species and oceans. A race that creates jobs in an American economy that is pushing more and more Americans under.

Greentech Media reports that John is looking for that clean tech "Netscape moment" that Valley folk remember well as an upstart browser that changed everything in the mid-90's.

Mr. Doerr also echoes Bill Joy, according to Greentech: "One thing that really intrigues Mr. Doerr on the technological side is the prospect of discovering solid-state ways to be disruptive in energy storage -- in other words, the supercapacitor. Whether Doerr is referring to stealth, mystery portfolio firm EES or  or another supercapacitor firm remains to be seen.

Explaining why the supercapacitor idea is compelling, Doerr quoted fellow KPCB investor, Bill Joy, with this aphorism: "Physics beats chemistry and chemistry beats biology. (Craig Venter of Synthetic Genomics might not agree with this.)"

Indeed, but having once brought the science community together to look into bio-info-nano for NASA applications, it became clear during that project that innovation is at the intersection of the very small in physics, chemistry, biology, and engineering. Is the super storage killer app somewhere there in convergence territory? Let's hope so, for a storage revolution would change everything, especially for distributed solar and other truly clean tech apps. (Note I like Guy Kawasaki too, for the record!)

The American middle class, who seem to be about everyone who is not a billionaire like John Doerr, these days, sorely needs the lift of a Green Rush. One would hardly expect to find an SOS call for help for the American unemployed in upscale La Jolla, but the on-target La Jolla Democratic Club re-published a New York Times essay by Bob Herbert, which lays out the chilling facts of what is really going on with U.S. unemployment. Herbert says:

"What you’re not hearing from the politicians and the talking heads is that the joblessness and underemployment in Americas low-income households rival their heights in the Great Depression of the 1930s and in some instances are worse. The same holds true for some categories of blue-collar workers. Anyone who thinks this devastating problem is going away soon, or that the economy can be put back on track without addressing it, is deluded.

There has been talk about income inequality over the past several years, but what is happening now is catastrophic. The Center for Labor Market Studies at Northeastern University in Boston divided American households into 10 groups based on annual household income. Then it analyzed labor conditions in each of the groups during the fourth quarter of 2009.

These are the kinds of jobless rates that push families already struggling on meager incomes into destitution. And such gruesome gaps in the condition of groups at the top and bottom of the economic ladder are unmistakable signs of impending societal instability. This is dangerous stuff. Nothing good can come of vast armies of the unemployed just sitting out there, simmering."

There is some very good news, however, as clean tech investment took a big healthy up turn in February.

"After a somewhat weak start to the new calendar year, the value of private equity investment in cleantech companies surged by 133 per cent in February to $547m from $235m in January 2010 and significantly improved year-on-year to stand more than three times higher than the $149m recorded in February 2009, according to a report from ZEPHYR and Bureau van Dijk.

Still, John Doerr, our nation turns our lonely eyes to you. Hit one out of the park. Please find us our national Netscape moment, and rebuild a national clean economy and the well being of Americans everywhere.

Kathleen Connell is a sustainability strategy consultant, educator, and citizen journalist. She worked for NASA in Silicon Valley and Washington DC. Now a resident of San Diego, she is also a hurricane survivor.

We are all hoping that America can come out from this very fast.I like those lines "Physics beats chemistry and chemistry beats biology. (Craig Venter of Synthetic Genomics might not agree with this.)"

Regards
Karin Mehta
hey i have this website www.cheapestcarrentalinfo.com