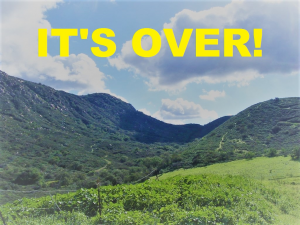 November 18, 2016 (San Diego)—A  decades-long battle over the proposed Gregory landfill has ended. Yesterday,  the Pala Band of Mission Indians announced the tribe has complete purchase of more than 700 acres of  the property—including most of Gregory Canyon and Gregory Mountain, a sacred site known as Chokla.

Shasta Gaughen with the Pala Indians called the news  “amazing,” adding in an e-mail, ”This means that a dump in Gregory Canyon will never happen. Chokla,  Medicine Rock, and other spiritual and cultural sites on the property will now be protected forever.  Critical wildlife habitat, endangered species, and the San Luis Rey River will be spared the threat posed by millions of tons of polluting garbage.”

GCL, LLC retained ownership of a portion of the property but has agreed to pursue construction of residential and commercial development instead of a landfill on other portions of the property outside of the mountain and canyon.

The news also drew praise from environmental groups. Van Collinsworth, founder of Preserve Wild Santee, told ECM the action is "a well-earned victory for conservation and all residents of San Diego County.”

Damon Nagami , senior attorney and director of the Southern C alifornia Ecosystems Project for the National Resource Defense Council wrote on the organization’s expert blog site that the victory protects “one of the most ecologically sensitive and culturally important places in the region, including the waters of the San Luis Rey River.”  A dump there would have desecrated Native American sacred sites and put local waters at risk, as well as destroying threatened and endangered species’ habitat, Nagami said.  The watershed supports critical drinking water sources for thousands of residents and businesses in San Diego County.

Critics have contended the dump is unnecessary due to improved recycling and reduction of waste at the county’s current landfill space,  which is adequate for at least the next 17 years.  The  NRDC filed a lawsuit to enforce environmental review among other efforts to halt the dump.

This never was a viable landfill site. The landfill was proposed to jack up the price so that someone would buy this steep property to prevent a landfill next to the San Luis Rey River. The flatter property was retained for residential development now adjacent to open space bought and preserved by Pala Band of Mission Indians . A win win for the developer. Preservation is a good deal anyway and a relief to many concerned citizens.