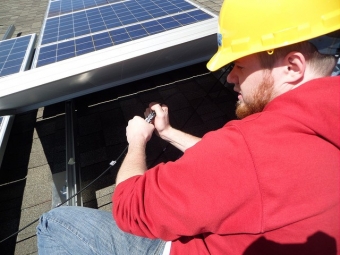 May 20, 2017 (San Diego) - GRID Alternatives entered San Diego eight years ago, with a solar installation in El Cajon.  Since then, the non-profit has put up a total of 824 systems throughout the county. This Saturday, they return to the same El Cajon neighbourhood for GRID Alternatives San Diego’s SummerSolarthon.

GRID Alternatives San Diego regularly does installations and trainings to give low-income community members opportunities for employment and to lower their cost of living. However, they only do marathon builds like this once a year.

Sixty volunteers will solarize six homes in a neighbourhood developed by San Diego Habitat for Humanity.

One of the teams is made up of Syrian refugees. Another is composed of women passionate about the environment. There are also teams of employees from Wells Fargo and SunPower.

“Solarthon is one of our favourite events, and it’s great to see our work coming full circle as we expand solar in this neighbourhood and lower the energy bills and carbon footprint of the residents,” said Paul Cleary, Executive Director of GRID Alternatives San Diego. 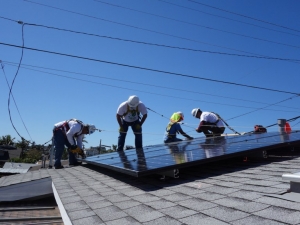 Pavel Consuegra and his family are among the recipients. They came to the United States as refugees in 2007 and are now American citizens. The Consuegras moved into the El Cajon Habitat for Humanity development last August.

They are overjoyed about receiving solar energy. The money they will save on their energy bills will go towards putting their two kids through college. Their eldest daughter is in the eleventh grade and will go to a four-year college after she graduates high school.

Pavel teaches workforce development for a local company and is spreading the word about solar industry careers in his community.

GRID San Diego has made a significant contribution to San Diego’s adoption of solar:

• An estimated $22,033,790 savings for clients energy bills, predicted savings over the course of 25 years

San Diego’s SummerSolarthon is part of a statewide SuperSolarthon that will also be held in Sacramento, and the Central Coast region. A total of 19 installations will be made that day.

GRID Alternatives installed a total of 8,519 systems since it was

All photos are from previous GRID Alternatives installs.