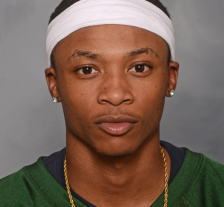 After a shellacking on their home field, the Grossmont College Football team responded with a clutch, road win in the final second of the game.

By Vinny Lavalsiti, credit to The Summit

October 23, 2017 (El Cajon) - Ah yes, it’s November! Thanksgiving is just three weeks away. You know what that means? No, not turkey -- it means football! Shortly, you’ll be huddled around you plasma 52” TV screen, hollering for your favorite NFL team. But will you be doing the same for your Grifin football team this month? Let’s take a look at the past couple of weeks of Griffin football since The Summit last updated you.

No, this is not a game of Madden. Fullerton College traveled an hour and a half to Grossmont to deliver a beating. The Griffins possessed the lead in this game for a total of five minutes thanks to a field goal from Nels Haltom. After that, it’s safe to say that it was all Fullerton College Hornets. Thanks to 422 yards of rushing and 8 rushing touchdowns, the Hornets soundly beat the Griffins 78-9. The Hornets had two quarterbacks who each threw for at least 100 yards and had one touchdown, completing 15 of their 21 pass attempts (71.4%). Two interceptions thrown by Griffin quarterback Brad Cagle didn’t help their cause either. Griffin running back Jerome Johnsonn III was the only piece of the Griffin offense to cross the goal line with a four-yard touchdown run. The Griffins dropped to a record of 2-4 on the year.

The Griffins were able to pull out their third win of the year by the skin of their teeth. 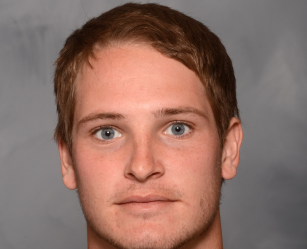 A touchdown from Griffin QB Brad Cagle (right) to WR Dustin Bruno and two field goals from Nels Haltom left the Griffins just three points down going into halftime, 13-16. Out of the locker room came the Griffins, looking to eclipse Orange Coast for the lead.

The third quarter was one defined by turnovers. Cagle opened up the half with an interception, putting Orange Coast College in prime position to score in Griffin territory. Luckily, the Griffin defense stood strong and caused a turnover on downs. All rejuvenation was shortly lost. Cagle drove down the field with three completions, just to be out done by another interception by the Orange Coast College defensive back Nicholas Ebanks with his second interception of the day. All of this excellent defensive play by Orange Coast must’ve left the Griffin’s defense hungry, not wanting to be out-done. Cooper Mirich of the Griffins intercepted Orange Coast quarterback Pete Mitchell, running the ball 13 yards downfield, just 2 yards short of the “Pick-6.” Johnsonn III, owner of the lone touchdown from last week’s game, bulldozed his way for a touchdown, giving the Griffins the lead for the first time in the game, 20-16.

A scoring frenzy would soon ensue.

Just two plays after the Griffin kickoff, Pete Mitchell and Orange Coast hit the jackpot with a 63-yard touchdown pass.

Cagle on the sidelines must’ve muttered to himself, “Only 63 yards…watch this!” Cagle and his offense trotted back onto the field and scored on a 75-yard deep ball to Luqman Barcoo, earning back their lead. A possession later, Cagle and Barcoo connected again for a 25-yard touchdown, extending their lead 34-22. Cagle and Barcoo perhaps the best QB-WR combo since Montana and Rice? Don’t read the press clippings, Griffins.

It’s the start of the fourth quarter and Orange Coast is hungry. After a change at the quarterback position, Orange Coast trotted downfield with new quarterback Ayden Auer going 4-4 on pass attempts. The last was a 17-yard touchdown, narrowing the Griffin lead to 34-29.

Cagle responded with three completions, totaling 42 yards, to put the Griffins in field goal position. Nels Haltom banged a 32-yard field goal through the uprights to make a touchdown with a 2-point conversion necessary for a tie game. Haltom’s field goal was the epitome of clutch and would result in being the deciding factor in the game. 37-29.

The scoreboard has been lighting up on both sides all game; A true shootout. Ayden Auer put the Griffin defense on their heels with a 33-yard pass, going into Griffin territory, poised to score. After three rushes of 22 yards from Orange Coast running back Nico Jackson, Ayden Auer said, “I’ll take it from here,” and dove into the endzone for a 5-yard rush.

With only four and half minutes left in the fourth quarter, Orange Coast had no other choice but to go for the 2-point conversion. After a timeout called by Griffins Head Coach Michael Jordan, the defense rallied and stood tall. With their backs against the endzone and the lead on the line, the Griffins showed they were the grittiest of the bunch, stuffing the quarterback sneak. 37-35.

To put this game out of reach, Brad Cagle and the Griffin offense needed to drain the clock and put some more points on the board to protect their team of any chance of a Orange Coast comeback. Unfortunately, the Griffin fans would need to rely on their defense once again after a three-and-out. It was only a 45 second drive; Exactly what the doctor ordered for Orange Coast.

Down two points, Orange Coast was determined. After the Griffin defense forced a fourth down and long, the Orange Coast offense had no other option but to “go for it” on their own 32 yard line. An inexcusable defensive holding penalty gave Orange Coast new life with a first down and a gain of 10 yards. Orange Coast gained momentum and pushed the ball all the way up to the Grossmont 19-yard line, leaving one second left on the clock. 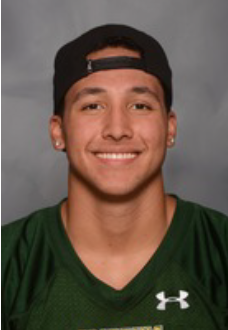 One second left, a 36-yard field goal wins it for Orange Coast and the Griffins would have a long bus ride home. The field-goal unit lines up, the Grossmont defense is communicating where to attack the offensive line. The ball is snapped, complete and utter chaos ensues as Ernie Garcia (left), the 6’2”, 220 pound linebacker from West Hills gets a fantastic jump, leaps, and spreads his Griffin wings to block and recover the game-winning field goal.

The Griffins maul Garcia and celebrate their third win of the year.

Brad Cagle finished the game with 363 yards and three touchdowns in the win. His counterpart, WR Luqman Barcoo, torched the Orange Coast defense with 9 receptions for an astounding 179 yards. Running back Tyree Range had a solid game on the ground as well with 73 yards on 12 rushes. Nels Haltom had a golden boot week seven, completing 100% of his field goals including a 52-yarder.

The Griffins sit in the middle of the pack of the National Southern Conference but the future appears bleak as 7-0 Fullerton College is riding high off their undefeated record.