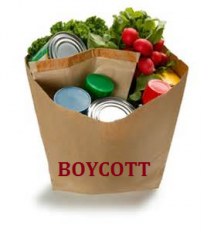 July 27, 2016 (San Diego)—A boycott of six Vons, Ralphs and Albertsons grocery store locations is underway starting this week, the United Food & Commercial Workers Union in San Diego has announced.  If no contract agreement is reached by August 8th,the union has voted to call a strike against all of the stores’ locations throughout southern California.

The boycott locations include two in East County:  the Vons store at 8011 University Ave. in La Mesa and the Albertsons at 9831 Campo Road in Spring Valley.

Other locations include Ralph stores on Mission Center Road in Mission Valley and on Twin Oaks Valley Road in San Marcos, a Vons store on Santa Fe drive in Encinitas, and an Albertsons on 3rd Avenue in Chula Vista.

Union leader Mickey Kasperian states in a post on the UFCW webpage, “Your Union attended bargaining sessions on July 20 and 21 fully prepared to bargain a mutually acceptable contract. Albertsons/Vons and Ralphs did not share this intention and their proposals continue to fail to recognize your hard work, the companies’ profitability and the increasing cost of living in Southern California. This is not acceptable.”

ECM news partner 10 Newsreached out to Vons, Albertsons, and Ralphs. Vons and Albertsons spokesman Carlos Illingworth said the boycott "is an unfortunate distraction that won't impact the outcome of the negotiations…We're doing the hard work at the bargaining table and that's where everyone's focus should be." He added, "We're dealing with complex issues, such as wages, pensions and healthcare. We're bargaining in good faith and giving negotiations the time and thought that they deserve. We are working hard to find a settlement that is fair to our employees, good for our customers and allows our company to remain competitive."

Negotiations will resume on August 1, 2016. Meetings for all members have been scheduled for August 8th to vote to accept or reject management’s offer. Workers previously voted back in June to strike if a deal is not reached.

That was then. This is now. I understand the difficulties of working many hours to provide for my family. Many hours. The options are endless for higher education this day and age and with little to no cost for those who fit the requirements. Working 72 to 96 hours a work week is a constant but still have maintained strong study habits in preparation for the program im about to enter. Taking the prerequisites have been challenging but manageable with a plan. I remember the lost grocery strike and I do recall it ended and customer service from the union members was far less hospitable after an agreement was reached and the trend has continued since then. If you know what you're worth, go get what your worth, but don't complain or run to the union and expect consumers (meaning me) to care because you want the position with the high salary and great benefit package but are unwilling to scare the ladder to do it. And here I thought it this "entitlement" movement was a generational flaw but its origin started much sooner than that. Whats inspirational is watching those who have been looking everywhere for work walk past lawn chairs, picket signs, and sunburns, greeted with dirty looks, occasional verbal lashings, but still with heads hi walk in with no benefits, no union inflated salary. Rather a feeling temporary relief knowing they will have electricity. They will have water, They will have food for their children. There's no union to back them or protect them. They are there because they need to be and are willing to walk through a not so great environment to do it. I will walk right passed bob the butcher holding his triple big gulp to support those who are doing the jobs of people complaining outside
Boycotts do not work because people like me will go out of our way to shop at boycotted stores, restaurants. 1) It is stupid to cripple a business because if it cannot survive, all jobs go with it. Detroit comes to mind. 2) Working fast food, grocery stores, department stores, hotel workers are all entry level jobs. They do not deserve college level pay. 3) If you feel you are underpaid, better yourself and go get a better job.

They have always paid much better wages and benefits. My brother-in-law started as a box boy decades ago and became a produce manager at a major grocery chain. He's raised a family to give his kids a better life, and made a good living there through the years (elsewhere in California). Actions like yours really hurt working families like his. Why would you want to do that?

My brother-in-law's father died when he was only 4 years old. He didn't have the opportunity to go to college because his mother, with three young boys to raise alone, couldn't afford it. So he went to work in the grocery business. His wife has to work for them to make end meet, but together they could give their children a better future and both of their kids are now in college. Our country should be protecting jobs for factory workers and grocery workers and construction workers -- since not everyone has the grades or the money for college.

I don't know the specifics of the contract dispute in this case,but I do honor picket lines.Coincidentally I happen to shop regularly at both of those stores near my home.  I will be taking my business elsewhere.  Trader Joe's and Costco, though not unionized, do pay their workers fairly and offer decent benefits, so my shopping dollars will go there until this is resolved since we don't have any union store alternatives near me.  I personally will boycott not only the individual stores targeted but the entire chains.

Although our family is hurting for money too right now, I am willing to pay a few dollars more for my groceries to assure that grocery workers and their families will be taken care of. If that means doing without something else, so kids like my niece and nephew can have a better future, then so be it. We should all avoid being selfish and don't shop at stores that don't take care of their workers.  I don't shop at Walmart, even though they have low prices, because they pay so little and force their workers onto the public dole to get healthcare and food stamps, buy products made with slave labor overseas, etc.  They are hurting the middle class,whereas groceries that paid good wages through the years have helped build the middle class.