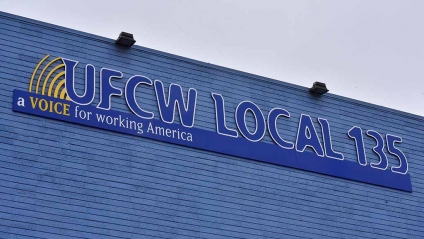 Photo:  UFCW Local 135 is one of the biggest labor unions in San Diego County. Photo by Ken Stone

June 12, 2019 (San Diego) - Members of seven Southern California food workers locals, including San Diego’s, will vote June 24 on whether to authorize a strike against three major grocery chains, it was announced Monday via social media.

Potentially targeted are Albertsons, Kroger-owned Ralphs and Albertsons-owned Vons — which took major losses in the last major supermarket strike in 2003-2004.  If a vote succeeds, union leaders can call a strike at any time.

Todd Walters, president of Mission Valley-based United Food and Commercial Workers Local 135, said Friday that bargaining had stalled in talks that began in March. A three-year contract expired March 3, but provisions are still in force.

On Facebook, Local 135 said the companies were delaying, demanding takeaways and would “slash wages for cashiers,” give “inappropriate wage increases that do not reflect the minimum wage, 20 cents for top rate clerks, less than 1% increase” and “put healthcare plan at risk of bankruptcy.”

The post added: “The time has come to show the corporations we won’t take this anymore and they need to get serious about a fair deal. This will show them we are united and ready to fight for what is right.”

A Ralphs spokesman Monday night said the company is negotiating in good faith for a “fair and balanced contract that is good for everyone.”

“As you know, negotiations are about finding compromise and this can take time,” said the spokesman, John Votava of corporate parent Kroger. “Throughout the negotiations, it’s business as usual in our stores and Ralphs is extremely proud of our associates who remain focused on serving our customers, communities and each other.”

In a June 5 update, Local 135 leaders said negotiators for Ralphs, Vons and Albertsons “continue to play games and push unacceptable takeaways and concessions.” They cited offers of pay raises of under 1% and a funding proposal that “threatens our health plan.”

The decision to call a strike vote apparently came amid Costa Mesa talks Monday between UFCW and the grocery companies. Walters said he was “still in negotiations” in a text at 7:57 p.m.

Last week, the locals said:  “Unless there are significant changes in their offer, your employer is giving us no choice but to take action.” 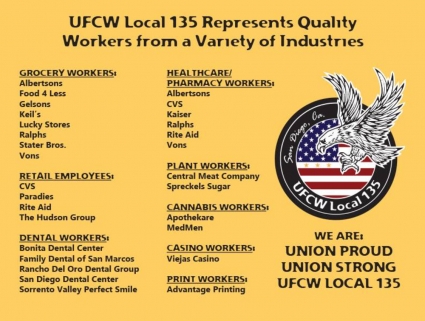 In an interview Friday, Walters said about 60 percent of current UFCW members were hired since the four-month strike ending in February 2004. He pointed to a big disparity in pension plans.

“People hired before the strike, which includes me, … get $44 a month of income for each year of service,” he said. “The people hired after the strike are getting $18 (a month),” yielding about $540 a month after 30 years of work.

Walters said contract issues have been “ignored and kicked down the road for all these years. The pension primarily is staring us in the face right now…. Something’s gotta happen.”

Besides San Diego and Imperial counties’ Local 135, other UFCW locals involved in regional talks are Local 8, based in Bakersfield; Local 324 of Buena Park, Local 770, based in Los Angeles; Local 1167 of Bloomington; Local 1428 of Claremont; and Local 1442 of Inglewood.

In San Diego, voting will take place at the Scottish Rite Center in Mission Valley, near Local 135 offices just north of Interstate 8.

Meanwhile, a bill that would let striking workers collect unemployment insurance benefits is wending its way through the California Statehouse.

AB 1066 by San Diego Assemblywoman Lorena Gonzalez was approved 51-19 by the Assembly and sent to the state Senate in May, where it has been referred to the Committee on Labor, Public Employment and Retirement.

If approved and signed in its present form, workers could get jobless benefits after four weeks on strike.

The California Chamber of Commerce calls the bill a “job killer,” incentivizing strikes and “transforming unemployment insurance into a political tool in trade disputes.”

AB 1066, the chamber added, would “expose employers to a significant cost increase during a time in which they are already struggling with the financial impact of labor negotiations and a strike, thereby jeopardizing the employers’ ability to maintain existing jobs and wages as well as the increased wages and benefits demanded by the union.”

In late May, the UFCW Western States Council lauded the bill, and quoted Vons employee Donna Villagomez as saying: “Striking is the last resort of workers working to influence working conditions, but employers keep too many workers in fear because they are one paycheck away from missing the rent or a car payment. When workers are eligible for unemployment insurance, they can stand up for fair treatment and workplace conditions knowing their families won’t become homeless.”

The Local 135 posting said a strike authorization shows the grocers “that we are united in our demand for a fair, balanced contract that respects our contribution to their success, and prepared to fight for it. … Hopefully the corporate negotiators return to the table and get serious about a fair deal.

“If not, we continue to prepare to show them our determination to get a fair deal, and strike if necessary.”

Representatives of Albertsons/Vons didn’t immediately respond to a request for comment.

AB Acquisition is the owner of Albertsons LLC and New Albertsons Inc. and is controlled by a Cerberus Capital Management-led investor group.