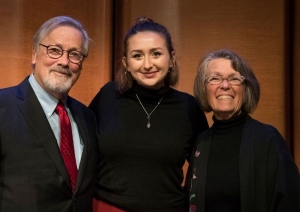 The first round is scheduled to take place at 4 p.m. on Sunday, March 18, at the Crest Theatre. Round two of the event begins Monday, March 19 at 8:30 a.m., in the Assembly Chambers at the state Capitol. Selected students will compete in a third and final round on the same morning immediately following the second round of the competition.

The winner of the statewide event will move on to represent the Golden State in the national finals, April 23-25 in Washington, D.C.

At the county competition, Greaves recited Sonnet 29 by William Shakespeare and Respiration by Jamaal May.

Greaves shared, “I am absolutely thrilled to be representing San Diego in Poetry Out Loud’s California State finals. I would like to thank Dr. Arapostathis, Mrs. Bisera, Nicole Havin, Carol Santiago, and my wonderful parents for their constant support.”

Write Out Loud is an organization founded in 2007 with a commitment to inspire, challenge and entertain by reading short stories aloud for a live audience coordinates the national program locally.

Beginning in 2005, this year’s state competition will be the 13th production from the California Arts Council. An initiative of the National Endowment for the Arts, Poetry Out Loud encourages high school students to learn about poetry through memorization, performance, and competition. California’s Poetry Out Loud is the largest event of its kind in the U.S., and has grown steadily since its inception. This year’s competition series encompasses 46 counties, 261 schools, and 783 teachers, reaching nearly 73,000 students across the state.

“California Poetry Out Loud is an exciting display of the potential of our state’s young people, the power of spoken word, and how wonderfully the project builds agency in our youth,” said Anne Bown-Crawford, Director of the California Arts Council. “It is rewarding to see confidence and creativity ignite so powerfully in each of our county champions. The program is truly a testament to arts education as a categorical imperative for the future successes of both our students and our state.”

The mission of the California Arts Council, a state agency, is to advance California through the arts and creativity. The Council is committed to building public will and resources for the arts; fostering accessible arts initiatives that reflect contributions from all of California's diverse populations; serving as a thought leader and champion for the arts; and providing effective and relevant programs and services.