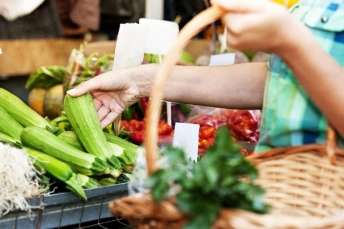 Rain or shine, the Grossmont Center Certified Farmers Market will offer local fruits and vegetables that are in-season and live entertainment every Wednesday. Shoppers can also subscribe to a Community Supported Agriculture program and pick up their weekly CSA box of fresh produce. Free reusable bags will be given to the first 100 attendees.

The Grossmont Center Certified Farmers Market will donate part of the proceeds to the La Mesa Park and Recreation Foundation to “share the love of the beautiful parks in La Mesa with the people who enjoy them,” according to a press release issued by the center.

Farmers will be able to sell directly from their trucks and customers can park free in the nearby Target parking garage, adjacent to the market. Interested farmers can email trevor@)grossmontcenter.com.

Announcement of the new Grossmont Center Certified Farmers Market comes on the heels of the city of La Mesa soliciting four requests for proposals to run the city’s popular La Mesa Farmers Market in the downtown village.

The oldest farmer’s market in East County,  the La Mesa Farmer’s Market is held on Fridays in the heart of the city’s downtown village on La Mesa Blvd. The downtown market recently moved from the Civic Center parking lot to the heart of the downtown village, where it’s proven popular with visitors and most businesses, though some businesses including several restaurants indicated lack of parking drove away some Friday customers.

The current contract with the La Mesa Village Association ends July 31.  The City Council majority has indicated it wants to see changes to address the concerns.

Councilman Bill Baber told ECM, "“It’s been a challenge to build a farmer’s market that works for everyone: merchants, restaurants, farmers, sponsors, neighbors, customers, and taxpayers.   We had less angst passing our climate action plan than this farmer’s market plan. Apparently, we’re better at saving our planet, than saving our farmer's market.”

Four proposals have been received by the city for a farmer’s market, all on Fridays. Those proposals are from the La Mesa Chamber of Commerce, the La Mesa Village Association, Brian’s Farmers Market headed by Brian Beevers (the LMVA’s current contractor), and Grossmont Center.

Grossmont’s RFP with the city would add a second farmer’s market on Fridays from 3-7 p.m., also at Grossmont Center, but in parking lots on opposite sides of the mall from the Wednesday farmer’s market that Grossmont already in the works.  Grossmont proposes to spend $200,000 to market its farmer’s market if selected and its proposal claims this would solve the parking problem at the current La Mesa Village association.Grossmont would also donate 100% of proceeds to benefit La Mesa charities.

At a recent Council hearing, Councilwoman Akilah Weber asked Beevers about moving the downtown market to another day to address parking concerns, but Beevers stated that farmers would not be available because they participate in other farmers markets in nearby communities. Councilmember Kristine Alessio says she feels “deceived” by Beevers upon learning that Grossmont has a Wednesday farmers’ market ready to launch.

It is unclear own many farmers will participate in the Grossmont Center Market or how the Center managed to attract farmers on Wednesdays. However the 8% vendor fee at the shopping mall for its proposed Friday farmer’s market will provide a lower cost of involvement than other markets in the area, according to Grossmont, which may have been an incentive for greater profitability for vendors to switch from competing marketplaces. Grossmont’s press release indicates it will “be attracting farmers from around San Diego County.”

It is unclear whether a new location at Grossmont Center for a farmer’s market would have long-term staying power for one, let alone two separate days of the week, however. Nor would this attract any customers to downtown merchants.

The LMVA proposal states, "Over the past year the market has brought in thousand of local and distant residents to the downtown Village," noting that this has boosted visibility for businesses as well as receiving "overwhelming positive support from the public" as well as most businesses downtown. "A healthy and vibrant farmers market in the heart of La esa will continue to be beneficial for the long-term growth and viability for the Village and the City of La Mesa," the LMVA proposal conclude.

LMVA president Peter Soutowood says the “proof is in the pudding” as to how many farmers will actually frequent Grossmont’s new Wednesday market.  But he told ECM that he is glad to hear of the new market and wishes Grossmont success. Soutowood believes there is room for more than one farmer’s market in La Mesa because people tend to shop close to home.

“People want to gather in the center of towns for trading. It’s been done for thousands of years,” he notes  citing other farmers markets that thrive despite similar markets in nearby neighborhoods. He contends the best place for the market is downtown, citing success of drawing crowds into the village during the past year that his group has headed up the event.

The LMVA’s modified market proposal to the city would start the street closure at 2 p.m. instead of 1:30 to help existing vendors in the village that rely on lunchtime traffic and enforce a requirement that farmers participating park in the civic center lot. It would reduce hot food vendors by 30% to address restaurants’ concerns about competition. The LMVA also proposes drop off points to help with accessibility. Adding a shuttle service was nixed due to prohibitively high insurance costs that would be nearly as high as revenues. A proposal to buy up and reserve some parking spaces for impacted merchants was denied by the city, Soutowood adds. The LMVA contends that keeping the market downtown is important to draw visitors into the heart of the city and enable the majority of merchants there to thrive, despite concerns raised by a handful of downtown merchants. The LMVA proposal would still include Beevers managing the market.

The proposal submitted by Beevers’ company on its own  would be similar to the LMVA in date, time and place but if a longer-term contract were signed, would include adding promotional events such as a Kids Day, Winter Shopping Day, and a day for offering tastes of foods from restaurants in the village to help promote their businesses. Beevers, who owns a farm in Harbison Canyon, also manages several other farmers markets around the region. He predicts that if the market were moved to a different location this would “crush its great vibe and current success.”

“I have more than doubled the vendor count and increased the overall profits for the market,” Beevers says of the La Mesa Blvd. location vs. the former locale at the Civic Center lot. He asks for the opportunity to continue making the market “amazing.”

La Mesa Chamber of Commerce’s proposal also keeps the market on Fridays, but calls for moving the farmer’s market back to the Civic Center location, where there is ample parking and space,as well as good visibility entering the downtown area.

“We’re excited to be part of the process,” Chamber president Mary England told ECM.  “We didn’t want to lose the history,” she adds, noting that La Mesa’s is the oldest farmer’s market in East County, running for the past 27 years. “For the Chamber, it’s all about growing and building.”

She has plans to grow the market, as the Chamber has grown other events such as its popular Taste of La Mesa event.  England wants to promote all businesses in La Mesa by bringing in some businesses from places like the Lake Murray area on a rotating basis with booths at the market, along with certified farmers, crafters, and other vendors. She also wants to promote those businesses in the village as part of the rotation. In addition, her vision includes featuring live music and other activities on a weekly basis, such as face painting or cooking demonstrations, to help draw crowds and market through the Chamber’s extensive etwork of contacts.

Though surprised to learn of Grossmont Center’s announcement of its own farmer’s market before the RFP process is completed, England isn’t about to back off from the challenge of proving that La Mesa can have two successful farmer’s markets.  serving the needs of residents in the city and beyond, since some adjacent communities lack farmer’s markets of their own. “Does that sound like Mary England?” asks the Chamber leader known for her can-do spirit. “We have the track record,” she says, adding that the Chamber plans outreach to vendors to hear their ideas as well as a “welcoming table” with greeters and maps to guide guests visiting the farmer’s market.

Whether or not the City Council will approve another downtown farmer’s market, and if so, which bidder will be chosen, is expected to be decided at the July 23rd Council meeting. If the LMVA is not selected, the organization will be working harder to market its downtown merchants and bring people into the downtown village for events such as  the current classic car nights, Oktoberfest and Holiday in the Village. For information on these events, visit http://www.lamesavillageassociation.org/.

Grossmont Center’s announcement assures that regardless of the Council’s decision, La Mesa will continue to have at last one farmer’s market in the near future – and possibly two to choose from.

Of note, in addition to its new farmer’s market, Grossmont Center also offers artisanal flavors and goods at the center’s Shop Local Market on the last Saturday of every month.

Grossmont Center is located at 5500 Grossmont Center Drive in La Mesa, featuring over 100 stores, half of which are community owned, as well as 20 restaurants and a movie theater. For more information, visit http://www.grossmontcenter.com.

View the requests for proposal:

When looking at Yelp, you can see the obvious reasons why their business may be failing. Also, walking by a mexican restaurant on TACO tuesday where there were 3 customers and 3 employees, highlights that the business is failing. Not that the Market is to blame. SAVE THE FRIDAY MARKET FROM SLANDEROUS BUSINESS OWNERS WITH CONFLICTS OF INTEREST TO CITY COUNCIL AND FAILING THEIR OWN BUSINESSES!!!! (btw, the LMVA have already said they would make the changes to support lunch hours, but they need the council to approve those changes. They can't change them without city council approval...these are changes the COUNCIL wanted, but they won't approve it....) Walking around on Friday's around hundreds of people at the market, going into shops, seeing most restaurants busy on Friday nights and more customers to the village is a win-win. Businesses that close up shop early or don't take advantage of the FREE marketing walking feet from their doors are the ones to blame. Talk to the businesses that are now BOOMING because of the market. What about them? Are we going to watch them fail and not understand the root cause to the problem? Better options, more welcoming staff, non-curmudgeon owners. THOSE are the root causes.

Pete Soutowood says his Fourpenny House initially had a downtown due to the Friday markets--until they got a booth and started selling bread and then promoting the fact that their restaurant is also a brewery making craft beers.

What a profound idea! La Mesa Chamber of Commerce thinking of all of La Mesa’s Business Community instead of everything being just being about and around the La Mesa Village Merchants Association at La Mesa City Hall!