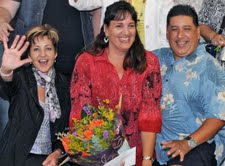 August 21, 2011 (El Cajon) – – A conga line of well-wishers and an engraved award are among the acknowledgements recently given to Maria Baeza, a Grossmont College employee for 22 years credited as the behind-the-scenes person for the campus’ biggest events, including graduation and student elections.

The former Grossmont College student, now a secretary for the Student Affairs office, is the latest recipient of the Grossmont-Cuyamaca Community College District Chancellor/Classified Senate Award, a commendation presented quarterly to outstanding staff.

Baeza’s exceptional organizational and interpersonal skills are among the attributes that make her an outstanding employee, said district Chancellor Cindy L. Miles, who presented the employee recognition award to Baeza at the July 19 Governing Board meeting.

“It’s obvious that her contributions to the district are longstanding and very deeply felt by students and by her colleagues as well,” Miles said.

Baeza’s boss, Agustin Albarran, associate dean of student affairs at Grossmont College, also has high praise for Baeza, whom he describes as “thoroughly accommodating and professional” with an indisputable work ethic.

He particularly noted her efforts in creating an instructional slideshow in the commencement robing area that he said reduces anxiety for about 500 students each year as they prepare for the Grossmont College graduation processional.

“Maria improves students’ lives in many ways,” Albarran wrote in nominating her for the award. “She has singlehandedly and markedly improved the quality of work produced in student affairs.”

Albarran said Baez also created more than 20 template letters used by the office, including sensitive discipline documents that are now also sent out at Cuyamaca College.

“I have complete confidence in Maria’s ability to work with difficult student issues while allowing students to maintain their dignity and confidentiality – a must in this field.” Albarran said.
Classified Senate President Wendy Corbin said Baeza is “an absolute example of what classified staff at this district are all about. We are so proud to have her be the example for us and show us what we should strive to achieve ourselves.”

Baeza came to Grossmont College in 1988 after graduating from Crawford High School in the Rolando area of San Diego. She finished at the top of her class in a secretarial program offered through the Job Training Partnership Act, and  was quickly hired by the college’s word processing department, where she worked for 20 years. In 2009, a department reorganization led to her transfer as secretary to the Student Affairs office.

Baeza said she was honored to receive the employee award and was surprised by fellow workers who announced her selection by gathering a large group of employees – and Baeza’s husband of 13 years, Mario -- who marched into Baeza’s office.

“The conga line coming into my office was so much fun and shocking at the same time – it was great!”  said Baeza, who lives in Rolando with her husband  and sons, Antonio, 9, and Domenick 7.

At Tuesday’s governing board meeting, Baeza was presented with an engraved acrylic award, along with a gift certificate from Barnes & Noble and a lunch with Miles and Governing Board President Bill Garrett.

For more information about the district and the colleges, go to www.gcccd.edu.