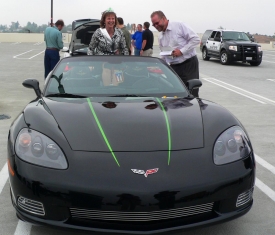 August 21, 2009 (El Cajon)– –Hundreds of students, faculty and community members turned out Monday, August 17 at a party atop a new $24.5 million parking garage at Grossmont College, celebrating the grand opening of the long-awaited facility, which includes a 3,200 square foot structure to house campus police. A collection of vintage cars and a caravan of new cars courtesy of local car dealers heralded the opening ceremonies, along with a ribbon-cutting and speeches by local officials.

The campus has been long plagued with a parking shortage so severe that in recent years, the college has allotted its last vestige of open land – a soccer field – to parking for several months of the year to accommodate a rapidly growing student population. With enrollment nearing 19,000, Grossmont College is gearing up for continued growth, as universities tighten admissions and significantly increase fees as a result of the state budget crisis. 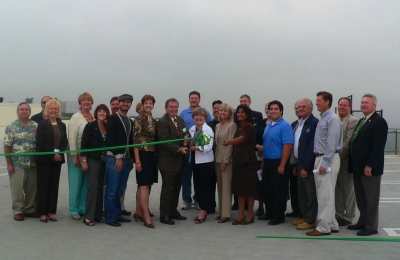 Grossmont College student Lisa Andrews knows all too well the musical-chairs-on-wheels experience of trying to find parking the first weeks of each semester.

“You drive around the parking lot, following students in your car in hopes that they’ll be leaving, so you can take their spot – sometimes you get lucky, but a lot of times, you’re competing with other cars and drivers who can get pretty aggressive,” she said, adding she was always wary about resorting to Plan B: parking her car curbside along the narrow, winding perimeter road when the lots are full. “The way some students drive – are you kidding?”

Student body president Marc Valenzuela has his own war story about campus parking. 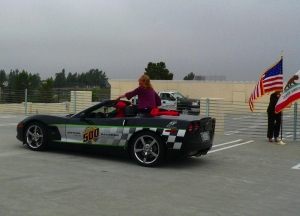 “On my first day here at Grossmont, I came an hour early to find parking and I was still 45 minutes late to class,” he said. “After that, for the first couple of weeks, I came two hours before class and slept in my truck.”

A facility grand opening -- not the kind of event likely to draw more than a collective yawn from today’s generation of frenetic, multitasking collegians -- spurred animated discussion among students gathered recently near the campus library. Commuters on the East County stretch of the 125 have been able to observe the structure’s progress from miles away, its hilltop perch easily seen from the freeway vantage point.

“I think it was an excellent investment,” Valenzuela said about the 403,000-square-foot, tri-level structure with its 1,431 parking spaces, bringing a net gain of 768 spaces to the campus. A grand opening celebration was held Monday, Aug. 17, starting with a continental breakfast. 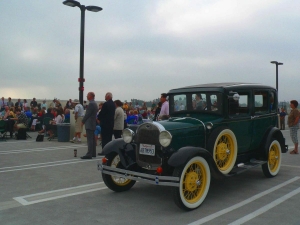 “This badly needed parking structure was built solely with local Prop. R dollars – the state does not fund parking lots, much less three-story parking structures,” Garrett said about the structure, which broke ground June 2008. “But without additional parking capacity, the college would not have been able to grow.”

Garrett said much deliberation went into the location of the parking structure, with talk of even purchasing adjacent land, but it was determined that the most cost-effective approach would be to build a multistory structure on an existing lot.

“There was some concern about a concrete behemoth in such a visible site, but the architect has done a great job with facades and landscaping to make it look quite attractive,” he said.

Dr. Sunita “Sunny” Cooke, college president, said the parking expansion is part of a facilities master plan designed to accommodate an enrollment of 20,000 students. The college currently enrolls about 19,000.

“When you have to convert what little open space is left on the campus – a soccer field – into a parking lot for several weeks out of the year, you know the time has come to think seriously about finding a more permanent solution,” she said. “Finding the right site was a challenge because the college is built on a landlocked mesa, surrounded by a freeway, residential housing, steep slopes with endangered habitat and Mission Trails Park.”

Once the decision was made to build the structure on an existing lot, the next dilemma was figuring out how to accommodate students with the loss of nearly 800 spaces during the facility’s construction.

“We couldn’t build more classrooms or other instructional space without accommodating more cars and we couldn’t accommodate more parking without temporarily removing access to some classrooms,” Cooke said.

The solution proved to be not only practical, but from a marketing standpoint, a home run.

The college and the district launched a Students First campaign to allow only students to park on campus from fall 2008 until this past June. The loss of hundreds of parking spaces meant everyone else – staff, faculty and administrators – parked at Gillespie Field, and from there, hopped a shuttle bus for the short ride to Grossmont College.

“Our philosophy has always been to benefit students,” Cooke said. “Our Students First campaign reinforced the message.”

A few of the ad hoc bus riders will enjoy a chauffeured drive into the parking structure Monday morning, led by a campus police chief in a lights-flashing, siren-sounding cruiser.

“This project is most definitely a win-win,” Cooke said. “We now have the parking to accommodate growth, plus a facility that improves the campus in multiple ways.”

The structure’s central location, as well as its elevators and pedestrian bridges, are particularly helpful to those with disabilities, who previously had only long wheelchair ramps to access the higher elevation of the main campus. The parking enhancement project, which included renovating the surrounding asphalt on Lot 5, brings the total number of parking spaces to nearly 4,400 campus-wide.

A plus to police

Joel Javines, who heads the district’s public safety office, said that after 16 years in a “temporary” trailer so small that a restroom doubled as storage space, and so obscure that many campus regulars weren’t even aware of its existence, the addition of a modern, high-profile facility is hugely welcome.

“The new police building will mean an improvement in parking services – the issuing of parking permits, for example,” he said. “The campus will have a distinct building that people will know they can go to for parking assistance and public safety. The facility, which is staffed 24 hours a day, provides at least triple the space we had previously and the extra room will mean we will be able to operate more efficiently.”

Where there was previously an evidence locker, there is now an actual room; dispatchers have a large enough work area to have easy access to monitors, computers and other electronic equipment; the police now have their own armory; and the addition of an interview room allows for more privacy.

Javines said there is an intangible benefit, as well, to the college’s new police facility.

“When people walk into a modern facility, it conveys a message of professionalism on the part of the employees,” he said. “A modern, easily recognizable police office will give people a greater sense of security.”

A benefit to teaching

“It’ll be good for teachers, who’ll be ready to teach with a little less aggravation from parking hassles,” he said. “Plus, fewer students will arrive to class late because they can’t find parking.”

With the parking structure complete, Grossmont and Cuyamaca colleges now have a total 10 new or renovated buildings in place with the high-tech capabilities demanded in a digital world. Currently under construction are a $36 million health/physical science complex due for completion in spring 2010, which will house Grossmont’s health professions programs. At Cuyamaca College, work continues on a $28.2 business and computer and information science building, also set for completion spring 2010.