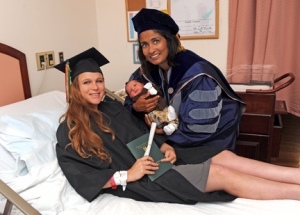 June 7, 2010 (El Cajon)--At 39 weeks along in her pregnancy, Nicole waited in line to walk at Grossmont College’s 49th annual commencement on June 3, when her water broke signaling the delivery of her fourth child. The 28-year-old didn’t want to leave the college and go to the hospital, while 4,000 people waited to celebrate the 1,398 students in the Class of 2010 receiving an associate degree or a certificate of achievement.

“I was wearing my cap and gown, and I really wanted to stay and walk,” said Stocking. “Based on my other pregnancies, I felt like I would have enough time to stick around. I had worked hard to earn both a degree and a certificate in business administration.”

However, Grossmont College health workers convinced Nicole to climb aboard the ambulance for a short trip to Sharp Grossmont Hospital’s Woman’s Center in La Mesa, where she delivered son Kaden at 6 a.m. the next morning, June 4. After 12 hours of labor, Kaden was born weighing eight pounds, six ounces and was 19 inches in length. Later on that same day, Grossmont College President Dr. Sunny Cooke visited the new mother at her hospital bedside to congratulate her and officially present her with a graduation scroll, and to get acquainted with Nicole’s husband Tony Stocking, Jr., and their three other children, daughters ages 7 and 5 and son age 2.

A San Diego native, Nicole Stocking had worked hard to earn her college diploma. A U.S. Army veteran, she began attending classes at Grossmont College in January 2006. Providing an outstanding example of commitment to higher education despite difficult circumstances, Nicole traveled five days at week during some semesters to the El Cajon campus from the family’s East County home in Guatay, located near Pine Valley. In the future, she believes her college education will be helpful in growing Tony’s music production business.

“I loved my time at Grossmont, and learned a lot from many outstanding teachers,” she said. “At times, it was difficult to stay in school, but I knew in my heart that I couldn’t quit. That’s why I was so bummed about not having the opportunity to walk at the graduation ceremony.”

At Grossmont College’s commencement ceremony, President Cooke noted the intimidating the economic realities now faced by the college. “This past year has been a most challenging year, one of the most challenging in our nearly 50-year history,” Cooke told the graduates, providing a thumbnail account of what happens when 10 percent state education budget cuts collide with a recession that prompts more students to return to school for new careers and training.

“Despite these challenges,” she said, “I want to assure you that our college remains committed to changing lives through education. We are committed to providing an exceptional learning environment that enables diverse individuals to pursue their hopes, dreams and full potential.”

The keynote speaker was El Cajon Police Chief Pat Sprecco, who earned his associate degree in administration of justice from Grossmont College in 1976. His career with the El Cajon Police Department has spanned 38 years. “This was our college,” said Sprecco, recalling how he followed his parents’ example and enrolled at Grossmont. “I took classes from some of the same instructors they had.” Sprecco was a 2009 inductee into the Grossmont College Walk of Fame. Because he did not attend his own graduation, Dr. Cooke surprised Chief Sprecco by calling him to be the first name recited.

Camille “Cami” Perez , who graduated with honors in the Occupational Therapy Assistant Program, delivered an outstanding speech as the student speaker. “College has taught every single one of us what it means to work hard and press on during the stressful times,” said Perez. “These experiences are what have molded and shaped us. They have laid the foundation for our lives.”

In a tribute that was new this year, faculty and administrators formed a congratulatory line along which graduates passed en route to a reception in the courtyard area of the campus. In the recessional were those bound for new jobs, better jobs, first jobs, and also those whose destinations will maintain Grossmont’s performance as a community college with one of the highest transfer rates to San Diego’s public universities, including San Diego State, UC San Diego and California State University San Marcos.

Also recognized at the commencement ceremony were the two recipients of the 2009-2010 Distinguished Faculty Award, Renee Tuller and Roxanne Tuscany. Roxanne could not attend because she was currently traveling to China for a speech/debate tournament with our students. Other Grossmont College commencement notables: 15 graduates earned a 4.0 GPA during their time with us; 181 students graduated with honors; 64 graduates were from Phi Theta Kappa, the international honors society; 59 graduates wore red, white and blue tassels because they are military veterans who attended Grossmont with the support of their veterans benefits; 44 graduates were international students.

It's a bit amazing that at 28 years old a woman can give birth to a fourth child, because nowadays girls are firstly searching to have a stable social position, a safe job and afterward bring babies to the world. Nonetheless, I can't say that I don't admire her courage. I wish I had a baby beside the health information technology courses I'm taking.

It's great that she could make both thinkg happend. Both are very important moments in one's live and she would have surrely regreted missing any of them. I know I reagret missing my graduation. Of course, my situation was a bit different... I was commited in a private drug rehab center where my child was also born... It was a hard time in my life, but I went through it well... My child was born healthy and that is all that matters!