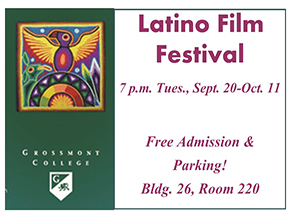 Latino Film Festival programming is coordinated by the Latin@ Alliance at Grossmont College.

This is a biopic about the journey and written memoir of the 23-year-old Ernesto Guevara, who would several years later become internationally known as the iconic Marxist guerrilla commander and revolutionary Che Guevara. The film recounts the 1952 expedition, initially by motorcycle, across South America by Guevara and his friend Alberto Granado. Guevara and Granado witness firsthand the injustices that the destitute face and are exposed to people and social classes they would have never encountered otherwise.

“Wild Tales” contains six shorts that all tell disturbing and funny stories. The first involves a plane full of people who discover they have something in common. The second is a tale of revenge. The third tells the story of a road-rage incident that escalates to unbelievable proportions. The fourth follows a man fed up with governmental bureaucracy. The fifth features a wealthy family attempting to buy their son out of jail stint after he kills someone in a car accident. The final episode takes place at a wedding where a jealous bride turns her reception into a Grand Guignol experience for her husband and some of her guests.

Junior is a 9-year-old living in a poor neighborhood in Caracas. School is about to start, and he has to have his picture taken. Junior, like many Venezuelans, has European, indigenous and African ancestry, which gives him thick, tightly curled hair. He becomes obsessed with straightening it, trying everything from blow-drying to applying gobs of mayonnaise. That last attempt drives his mother, a struggling widow, insane; she threatens to "cortarle el pelo," just cut all his hair off. “Pelo Malo” is a rare look into identity politics among Latin Americans, where racism is often a taboo topic.

Originally known in Spanish as “El Laberinto del Fauno,” (“The Labyrinth of the Faun”), “Pan’s Labyrinth” is a dark fantasy film. The story takes place in Spain in May–June 1944, five years after the Spanish Civil War, during the early Francoist period. The narrative of the film intertwines this real world with a mythical world centered on an overgrown, abandoned labyrinth and a mysterious faun creature, with which the main character, Ofelia, interacts. Ofelia meets several strange and magical creatures who become central to her story, leading her through the trials of the old labyrinth garden.

For more information about Grossmont or Cuyamaca College, go to www.gcccd.edu