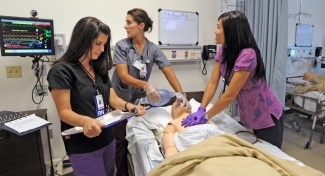 A heart patient, Smith is hooked up to a monitor, looking pale but otherwise resting calmly. Cordova, the oncoming day nurse, begins her morning assessment, studying his medical chart and taking his blood pressure. Also in the room are Smith’s wife, a second nurse and a certified nurse’s assistant, who is busy cleaning the patirent and readying him for breakfast.

Suddenly, the patient complains about his heart racing and the monitor confirms a dangerously fast heart rhythm. Moments later, his breathing becomes labored and the monitor now shows his heartbeat has become weak and irregular. Cordova calls for a “Code Blue” team, hailed in instances of cardiac arrest, and begins CPR. Smith’s wife is ushered away from the bed, a charge nurse arrives to further survey the scene, and the room is now abuzz with activity. Moments later the Code Blue team arrives, a defibrillator is engaged, the familiar call of “clear” preceeding each shock of the heart.

What, for all apperances seemed lke an actual hospital room was, in fact, a high-tech simulation lab inside Grossmont College’s recently completed $35 million health and science complex, with a lifelike computerized mannequin, or SimMan, filling in as patient Smith.

Recently, a corps of about 35 brand-new nurses, along with a crew of veteran nurses charged with a two-week orientation of the mostly 20-ish women and men in the protocols of Sharp Grossmont Hospital, spent a day at the college for a few hours of training and putting what they had spent the past few years learning in nursing school, into practical use.

Debbie Yaddow, the college’s associate dean of nursing, said Grossmont’s simulation labs with their half-dozen patient simulators have been used for the past year by Grossmont, Alvarado and Scripps-Memorial hospitals, but last week’s contingent of trainees was the largest ever and the first to use the sparkling new labs inside the Health and Science Complex, the latest Grossmont College project made possible by the 2002 passage of the $207 million facilities bond measure -- Proposition R -- and state bond funds. The nursing program now has a three-bed “intensive care unit,” a five-bed simulation lab and three regular labs, which also are used for classroom instruction. All have video capability.

“This facility is fabulous because you can run five different scenarios at one time without any disruption – at the old building, there was room only to do one and so the groups had to each wait their turn,” Yaddow said. “There is a lot more space, plus better recording equipment for instructors and trainees to review how they performed in the scenarios. We even now have a wireless mannequin which, unlike the others, is not connected to a bunch cables. It can be transported and procedures such as turning patients and moving them onto gurneys can be practiced, since there’s no wiring to contend with.”

“I am very pleased that we can make the lab available to them at this time,” she said. “Opeing it for their training reflects our appreciation for the clinical placements they provide our nursing students to fulfill their degree requirements and for their other support also, iincluding equipment donations. Our partnerships with them are invaluable.”

Jennifer Smith, who graduated in June 2010 from Grossmont College’s nursing program and was among the new nurses, said she was excited to return to the college to see the new facility which has its official grand opening Sept. 17.

“It’s incredible, the amount of room you have, and the equipment is great – I just wish I was still at Grossmont (College) so that I would get to be a student using this new facility,” said the 28-year-old East County native, adding that the 2 1/2 years she waited to get into Grossmont Collegee’s highly regarded nursing program was well worth the effort.”I am so glad I chose Grossmont College to get my nursing degree -- the support from the teachers, the facrt that the class sizes aren’t too bad, the learning opportunities available here.”

As the nurses broke into small groups to make the rounds of the four scenarios set up for the day’s hands-on learning, Gennie Reil, a Grossmont Hospital nursing specialist and one of the trainers, explained that the purpose of the day’s experience was to familiarize the new hires in the hospital protocols when dealing with “Code Blue” situations, and when calling for assistance of the rapid-response team.

“This is an opportunity for you to pratice the protocols before you have to do it at the hospital,” she told the nurses, who were each given a role to play in the 20-40-minute scenarios, from the primary nurse, the nurse’s assistant, the family member, the charge nurse and others.

The medical mannequins, like the SimMan models Grossmont first began using in 2001, have been refined over the past decade, thanks to computer software advances and improved engineering that allow the lifelike devices to simulate an even wider range of bodily functions and reactions to the poking and prodding by students and nurses. Not only can they blink, drool, bleed, breath and urinate, the latest models, eqipped with integrated speakers, can speak and emit realistic heart, lung and bowel sounds. In short, the mannequins have become much more lifelike in their responses to procedures such as cardiopulmonary resuscitation, intravaneous medication, intubation, ventillation, and catheterization. Technicians operate them from inside a control booth via laptops and software that can mimic reactions to medical and nursing procedures.

With its $190,000 slice of a federal omnibus bill signed last March, Grossmont College added to its stable of patient simulators and purchased digital cameras and recording equipment to monitor and record users for training and debriefings. Lab technicians Pat Murray and Dan Lopez used last week’s scenarios to work out the bugs in the recording equipment before the fall semester begins Aug. 23.

In addition to the nursing simulation labs, the health and sciences complex is chockful of simulation labs and training areas for other health professions and science-related programs the college has to offer:

Besides the nursing simulation labs, the facility features a casting room for the orthopedic technology program; a mock apartment for students in the occupational therapy assistant program; a blood-spatter room for forensic technology students to analyze blood drops; a laser photography room for bullet trajectory analysis; a rooftop deck for astronomy students and star-gazers; a simulated ICU patient station with ventilators to train respiratory therapy students, and more.

With the Health and Science Complex now completed, next on the Prop. R agenda are the Grossmont College Student and Administrative Services/Griffin Center Renovation due for completion in winter 2011, and the expansion and remodel of Cuyamaca College’s library, expected to be completed this summer;

Thanks for posting such an important article. The new science building is located at a beautiful location and also anything with a $207 million facility will definitely look good and feel good. The mock apartment will also boost the students in performance and gain mastery as well. The Cuyamaca College is also an awesome place and it was interesting to see the college offering courses to the local residents.
University park homes