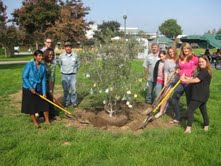 September 6, 2011 (El Cajon)--Grossmont College students and President Sunny Cooke (far left) remembered the 10th anniversary of the 9/11 terrorist attacks by planting an olive tree on campus. Before the tree was planted, students wrote their thoughts and feelings on small cards and then tied the cards with ribbon to the branches of the tree. The students wrote about such topics as bravery, resilience, faith and freedom inspired by the Sept. 11, 2001 terrorist attacks on the World Trade Center in New York City, the Pentagon in Washington, D.C. and Flight 93.
Grossmont College’s 9/11 memorial activities were planned by the Student Affairs Office and the Associated Students of Grossmont College, Inc., the student government organization.