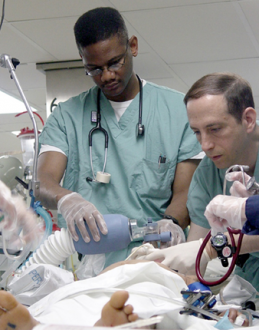 October 21, 2019 (El Cajon) - Neil Armstrong had become the first man to set foot on the moon just one month earlier, the minimum wage was just $1.60 per hour, and 50 years ago this fall, Grossmont College launched its renowned Respiratory Therapy program with an initial cohort of 20 students.

More than 1,000 respiratory therapists have graduated from the Grossmont College program since its inception in 1969, all of whom leave the El Cajon campus with 576 hours of hands-on, clinical experience at an array of local medical centers.

“In any hospital you go to in San Diego County, you’re going to find a graduate of the Grossmont College Respiratory Therapy program,” said Program Coordinator Peggy Wells.

With National Respiratory Care Week beginning October 20, Grossmont College has a lot to celebrate. The El Cajon campus offers the only public, not-for-profit Respiratory Therapy program in San Diego County, and its cost of approximately $5,000 is a fraction of what private schools in the region are charging.

The low cost and high standards are what drew Diana Berriel, who enrolled in August 2016 at the age of 36. She graduated two years later and was hired at Sharp Memorial Hospital three months later as a floor therapist whose responsibilities include assisting physicians in inserting a breathing tube through a patient’s mouth and into the airway, operating BiPAP machines for patients in respiratory distress, attending all code blue events and administering nebulizer treatments.

“I feel like I’m part of a team that is saving people’s lives and helping them get better,” Berriel said.

The job outlook is excellent, too. The federal Bureau of Labor Statistics projects employment in the field to grow by 21 percent during the 10-year period ending in 2028. The average annual wage in San Diego County, meanwhile, was just short of $80,000 as of May 2018.

Alex Zesati, 25, landed a job as a respiratory technician at Sharp Grossmont Hospital while completing his clinical assignment at the La Mesa medical center, and he was hired as a respiratory therapist at Rady Children’s Hospital this past summer.

“This is probably one of the best programs of its kind anywhere,” Zesati said. “It’s recognized by doctors, nurses and other respiratory therapists. And you’re never alone; there is always someone willing to help you out.”

“What sets the program apart is that it emphasizes anatomy and physiology, so you leave with a solid understanding of what is going on with the human body in relation to the respiratory system,” Berriel said.