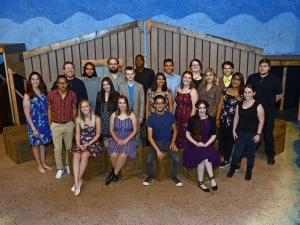 August 3, 2017 (El Cajon) - Adventure is where you make it. In this rendition of Treasure Island, Robert Louis Stevenson's beloved tale adapted for the conservatory by Jeanette Thomas, Jim is now Jamie, a girl, and she finds life is the adventure. Escape your every day life for a couple of hours and live the adventure of Treasure Island, directed by Brian Rickel & Mitzi Smith and with scores by musical director John Reynolds, complete with pirates, surprises and fun.

No longer the tale you grew up with, in this version, Captain Mad Morgan Smollett, is also female. Played by Delia Mejia, the captain steals most of the scenes she's in. Her acting keeps getting better and better. The music includes hip hop, rap, pop, rock and even a forties-style number, songs which I'm sure are mostly original gangsta. The dances are brilliantly entertaining. Demetrius Clayton played Long John Silver. Not only was his performance masterful, his rap number "All Hands on Deck" wowed the audience.

The Summer Arts Conservatory program enables students performers and technicians to learn from professional directors, choreographers and others what it's like to work a professional theatre. It’s funded by your private donations.

The story takes place in the fall of 1883 at the Admiral Benbow Inn near Bristol England, on board the Hispanola, and Skeleton Island after Jamie Hawkins gets hold of a treasure map and talks the family doctor into taking her on an adventure to find the loot.

The cast is amazing. All the students bring forth their best. If you choose to take this adventure yourself, it promises to bring you a good time.

Ashley Carter plays Jamie, outstanding in the lead. I want to mention Delicia Nieto, who was terrific as Billy Bones. Luke Benning took on the role of the Doctor a more serious role. Kristian Power knocked it out the park as Ben Gunn, and the pirate crew members are all fabulous. This show rocks.

You also have a chance to win a pirate chest filled with goodies in the opportunity drawing at $5 a ticket, which helps fund the next show.