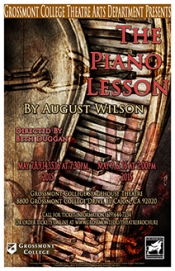 May 14, 2015 (El Cajon) - The Piano Lesson was written by American playwright August Wilson in 1890 as the fourth play of ten in  the Pittsburgh Cycle. The play received a Pulitzer Prize for Drama in 1990. The play was inspired by a Romare Bearden painting. Wilson intended the play to deal with self-worth and ends up asking how do you best put your legacy to use?

"In the 1930s, an African American family in Pittsburgh struggles with reconciling the past and the future while making sense of their family legacy. Boy Willy has a plan to purchase the land upon which his family once toiled as slaves, but his sister Bernice is opposed to the idea since it requires selling a family heirloom—a piano—upon which is carved their family history. The prospect of a more secure future runs up against ghosts of the past in this modern American classic by August Wilson. A moving and thoughtful drama, The Piano Lesson provokes the question of what, ultimately, is the price of freedom and a fresh start" - Quoted from Grossmont theatre website.

The Grossmont players do a great job. We saw Romeo and Juliet there recently and it was delightful. I'm not normally a Shakespeare fan but they made me one, and least for that performance. I almost had to be restrained from shouting: "Don't kill her, she's okay."