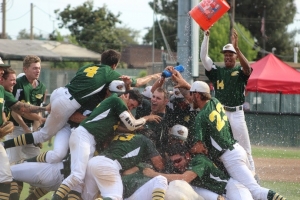 May 30, 2017 (El Cajon) - The last time former West Hills High standout Jeremiah Barr played in a big-time stadium, many thought his baseball career might be over.

Playing as a senior for the Wolf Pack, "J-Barr" dislocated his kneecap while swinging at a pitch after his cleat became lodged in the rubberized batting box at Petco Park, considered one of the cathedral ballparks in Major League Baseball.

A year later, playing in the biggest stadium since the near-devastating incident, Barr made up lost time en route to a state championship.

Barr registered half of the 10 outs he recorded on strikes in relief, lifting Grossmont College to the stats CCCAA community college title after taking down defending titlist Santa Rosa JC 10-6 on Memorial Day Monday (May 29) to take the best-of-3 series in three games.
For Barr, a left-hander who started the season slowly to rebuild strength in his knee, eventually became the Griffins' closer, which meant he was often pitching for the save, Instead, the freshman collect his first victory of the season for the G-House (38-8-1) in the biggest contest of the '17 campaign. The Bear Cubs fell to 38-11.
The Griffins led from wire-to-wire, although the Bear Cubs fought back on several occasions. Two runs in the 3rd and 4th inning gave Grossmont a 4-1 lead, but when Santa Rosa scored in the 4th and were threatening to take the lead, Barr was called upon to takeover for 6-foot-5 righty Dylan Gargas.
In the 7th, the Bear Cubs scored three times to move within 6-5, but Grossmont answered with four markers in the 8th to seal the school's first state baseball crown.
Grossmont first baseman Noah Strohl paced the offense by driving in four runs.
Designated hitter Robert Bostedt (Granite Hills HS) started the inning with a 3-run double, then scored when Strojl also doubled. Both Bostedt and Strohl both batted 3-for-5 to pace a 14-hit attack.
Grossmont captured the series opener 3-0 as Griffins freshman pitcher Tim Holdgrafer ran his record to 11-0. In Game 2, Santa Rosa held on to win 5-4, as another former West Hills pitcher, sophomore Donivan McCrystal (9-2), tossed four solid innings but came away with no decision.
The state tournament was the 68th annual by the California Community College Athletics Association.