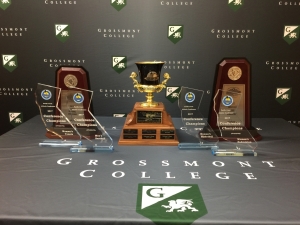 A state community college championship in baseball has vaulted the college to the top to win the coveted Chet DeVore Trophy for the second straight year as the most successful men’s and women’s intercollegiate athletic program in the Pacific Coast Athletic Conference.

In addition to the becoming the first community college in San Diego County to capture a state baseball title, Grossmont netted conference or division titles in six sports to garner its third DeVore  trophy in the award’s eight year history. It also earned PCAC’s top athletic honor in 2013-14 to claim the trophy named after the late Chester S. “Chet” DeVore, the founding commissioner of the 12-college conference.

“We are so proud of our students and athletic staff for their commitment to athletic and academic excellence,” said Thomas Armstrong, associate dean of athletics. “Our Griffins have just completed one of the most magical and dominant sport seasons in the history of the college and the conference.”

Armstrong said the teams’ accomplishments in the classrooms have been no less stellar, with athletes like the women’s badminton team having an overall GPA of nearly 3.8, and the women’s volleyball team with its proven track record of scholarships to leading universities.

Teams in the conference, which include the eight community colleges in San Diego County, plus four colleges in Riverside, Imperial and San Bernardino counties, are awarded points for placements in conference and state competitions.

In addition to the baseball team, women’s badminton garnered Grossmont College’s first state individual title, thanks to Yukari Naono, an international student from Ehime, Japan, who also teamed up with Rebekah Leslie to win the college’s first state title in doubles play. That competition was an all-Griffins final, with the four athletes all playing for Grossmont College.

Women’s volleyball coach Jamie Ivers won the conference’s Female Coach of the Year honors by guiding both her indoor and beach volleyball teams into the state championships finals and third-place finishes.

Some 400 student-athletes participate in the college’s 10 women’s and seven men’s teams. About a quarter continue their athletic careers at the four-year level. Recognizing the demands and challenges associated with being a student athlete, Grossmont’s Griffin Academic Assistance Program provides support to help students succeed in their studies and maintain athletic eligibility.