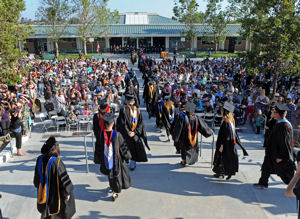 June 2, 2012 (El Cajon) -- The commencements held at Cuyamaca and Grossmont colleges this week, in which more than 2,300 students received degrees or certificates, were a joyous and welcome change to the budgetary gloom that has settled over the state’s community colleges.

Cuyamaca College honored 695 students who received degrees or certificates Wednesday at the 34th annual commencement held at the student center quad. On Thursday, Grossmont College lauded 1,664 students receiving their degrees and certificates at the college’s 51st commencement at the main quad.

Both colleges in the Grossmont-Cuyamaca Community College District have had to deal with four years of state budget reductions that have led to funding losses in the millions of dollars and cutbacks for hundreds of classes. For those two evenings, the campuses erupted with the sounds of elation as families and friends applauded and shouted with fervor for the graduates of the class of 2012.
“You have the opportunity to transform our world – you are our future,” Sunita V. Cooke, Grossmont College president, told the graduates. She directed the audience’s attention to the recently-renovated student center and Student Services and Administration Building, the newest of the college’s Proposition R-funded facilities that a year ago were little more than empty shells of buildings surrounded by construction debris.
Cindy L. Miles, chancellor of the Grossmont-Cuyamaca Community College District, told graduates that the dollars spent on their education provide returns that couldn’t be matched anywhere on Wall Street.
“A study we had done showed that every dollar you invested in your education here will mean an increase of $6 in future earnings,” she said. “The return on your investment is 15.4 percent and an earning capacity of $1 million over your lifetime. Now that’s something to cheer about.”
The people to take the podium at the commencement ceremonies were an intriguing mix: retiring professors, an entrepreneur, a nurse, an Iraqi immigrant-turned-future engineer whose perfect 4.0 grade point average at Cuyamaca College earned her the ranking of class valedictorian, and a former drug-addicted, troubled young man who credits Grossmont College for his transformation into a soon-to-be Stanford University undergraduate.
”It is a direct result of the supportive people on this campus – the students, student leaders, professors, counselors, and staff – that I now have a new purpose, a new life,” said Danny McKay, Grossmont’s student speaker, who shared his story of redemption and triumph as a former substance abuser and alcoholic who managed to veer from a path of self-destruction through a religious awakening and the discovery of hidden talents and career aspirations. “Here at Grossmont, our motto is Changing Lives Through Education, something I can humbly affirm and will represent for the rest of my life.”
Cuyamaca College’s valedictorian, Sahira Dawod, had her own story of an educational epiphany and finding refuge from life’s tribulations in the hallways of academia. Dawod, who arrived in the United States from Iraq in 2001, started at Cuyamaca in 2004 with limited English skills. She credits the excellent instruction she received for being able to graduate with a 4.0 grade-point average.
“Education is as important as the air we breathe because it is beneficial in many aspects of life, especially personal and social. It is the only possession that cannot be taken away from you,” she said, adding that her classes helped her cope with the loss of two siblings in Iraq.
The civil engineering graduate recently passed a grueling certification exam and is looking for work in the engineering field to support her three young children and husband, who is unable to work for medical reasons.
Mark J. Zacovic, Cuyamaca College president, echoed Dawod’s praise for the faculty, staff and administrators at the Rancho San Diego campus. “This is an institution whose faculty members have superior qualifications, and a strong sense of commitment to their students and the college,” he said. 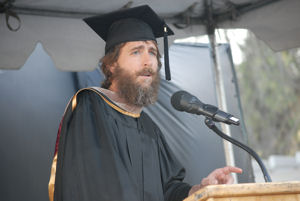 In his keynote speech, Greg Koch, CEO and co-founder of Stone Brewing Co. in Escondido, praised Cuyamaca for its progressive sustainability efforts, something he pursues in operating the nation’s 11th largest craft brewery and its companion enterprise, Stone Brewing World Bistro & Gardens.
A self-described late bloomer who found his career niche at age 32, Koch relayed a message of commitment to one’s aspirations, a single-minded drive to follow a path that others may attempt to discourage. Koch told graduates not to be afraid to fail and noted that ignorance can be a powerful ally.
“The definition of ignorance is not stupidity – it is the state of not knowing,” he said. “I think it’s been my single greatest attribute in business over the years. So many of the things that I’ve done, I’ve done only because I was too ignorant to know that they weren’t supposed to be done that way.”
(Click here for Koch’s list of five steps to follow for career and personal success.)
Diana Marie Pico, a health and wellness counselor and registered nurse who also operates a company specializing in ancient healing traditions blended with modern wisdom, returned to Grossmont College to continue the tradition of having a college alum give the commencement speech.
After graduating from the college in 1986 with an associate degree in nursing, Pico launched a 24-year career as a traveling RN, serving nearly every major hospital in the county and working in a variety of patient care settings. The wife of Anthony Pico, the elected chairman of the Viejas Band of Kumeyaay Indians, has also traveled extensively with her husband to explore the ancient healing traditions of indigenous people.
“Cherish every moment you have on this Earth,” Pico said. “We are only here for a short time. So make good, healthy choices in your life with regard to your body, your emotions and your mind.”
Governing Board President Bill Garrett drew chuckles with his message to graduates: “Let me tell you now that there will never be a better time to ask for money,” he said.