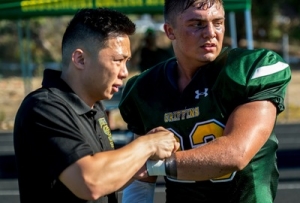 November 6, 2017 (El Cajon) - After an embarrassment from Saddleback College, the Grossmont Griffins recuperated and gave their fans and program something to smile about when judging their performance from this year.

Another ugly Saturday for the Griffin football squad along with another ugly box score. Grossmont College was handled in one of their last road games of the year, losing 24-77. Saddleback’s quarterback, Cam Humphrey, had a near-perfect day going 15-19 passing, two touchdowns and 230 yards, allowing his backups to get some reps in as well. The Griffins had trouble all day trying to contain Saddleback running back Amari Demercado, who scored five touchdowns and had 160 yards on the ground as well as 58 yards receiving. Griffin quarterback Cagle’s four interceptions didn’t help Grossmont that much either.

Grossmont currently sits in the middle of the pack of the National Southern Conference, but the future appears bleak as first place, 8-0 Fullerton College is riding high off their undefeated record.

Two middle-of-the-pack teams in the National Southern Conference faced off for a matchup that had the moral implications of “Who wants third place more?” There are only two games left in the season for these two teams and playoffs are not in sight, however, that didn’t prevent any of the effort shown on the gridiron this college football Saturday. Head Coach Michael Jordan led his squad onto the field for the final home game of the year, hoping to put on a show for the hometown fans for the last game of the year. They would not be disappointed. The game started off slowly for both teams which included an interception for both starting quarterbacks. Golden West would gain an advantage going into the second quarter with a “gimme” field goal from only 26 yards out. 3-0 Golden West.

To start the second quarter, Golden West quarterback Joe Pyle drove his team down field soundly with 82 passing yards until the Grossmont defense stood tall and forced a fourth down which parlayed into another Golden West field goal. Grossmont quarterback Brad Cagle responded quickly with a string of pass completions of his own, including a 40-yard pass to Mylik Steen. After a passing interference penalty by Golden West, Grossmont College wa at Golden West’s two-yard line, in prime position to dive over the pylons for a touchdown. However, Golden West forced a goal line stop of their own. Grossmont and kicker Nels Haltom took the three points with a chip-shot field goal, closing the lead to 6-3. Golden West wasted no time their next possession and after just two plays, quarterback Joe Pyle hit the jackpot with a 64-yard pass to wide receiver Derrick Reese who was finally tackled at the Grossmont five-yard line. Golden West running back Tevon Valdez rushed into the endzone for five yards and the touchdown. After the PAT, Golden West leads 13-3 going into the locker room at halftime.

Golden West would surmount their lead out of the half with a slow and methodical drive. Joe Pyle was 6-8 on completions and a rush for 23 yards, but another four rush of four yards was the scoring play. Golden West leads by 17 points, 20-3. On the next drive, Grossmont entered opposing territory, but all momentum was lost after Brad Cagle threw his second interception of the day to Golden West corner back Jason Thomas. Grossmont College’s defense had a pivotal three-and-out, including a crucial sack from Grossmont linebacker Logan Baker which knocked Golden West out of field goal range. After a punt that pinned Grossmont to the 11-yard line, a 28-yard pass completion by Cagle and a 33-yard rush by Jerome Johnson III led to a 89-yard touchdown drive that ended with a touchdown pass to running back Sam Stephens. The fourth quarter would commence with a score of Golden West 20, Grossmont 10.

Grossmont fans sat shivering in their boots and biting their nails, hoping that their season wouldn’t end on such a sour note. Cagle would summon to these hopes with 66 passing yards that was capped off with a 17-yard completion to the one-yard line. Johnson III barreled into the endzone for his second touchdown of the day, shrinking the Golden West lead to just three points. Not to be outdone, Golden West scored with a 24-yard touchdown pass that put them ahead two possessions while burning six minutes off the clock. Cagle and Steen were not phased. Cagle dropped back in the pocket and delivered a 62-yard pass right in Steen’s gloves. However, a foolish unsportsmanlike conduct penalty would move the Griffins from the one-yard line back to the 16. Stephens and Cagle connected again for Stephens’s second touchdown of the day. Golden West 27-24. Looks like a Pyle and Cagle have drawn their pistols out of their holsters. It’s a shootout.

Kicker Nels Haltom booted the football down field for the kickoff, but Grossmont defensive back Kevin Francis punched the ball out of returner Xavier Smith’s hands and would be recovered by Grossmont at the Golden West 17-yard line, putting Grossmont and Cagle in the redzone. However, Grossmont could not capitalize on this opportunity and would have to result to a field goal. A very important three points as Grossmont has completed the 17-point comeback to knot it up at 27-27 with four minutes and 11 seconds left to play.

Pyle and Co. trotted out onto the field at the Golden West 25-yard line, looking to score on a game-winning drive. Golden West made it up to the 47-yard line, closing in on a possible win. In arguably one of the most clutch plays of the year, Grossmont freshman Lane Self intercepted Pyle and ran the ball back 62-yards for a pick-six, giving Grossmont their first lead of the game with just under three minutes left. However, a blocked extra point from Grossmont kicker Connor Erwin would rear its ugly head just seconds after.

Joe Pyle, with ice in his veins, running on pure adrenaline, went a perfect 4-4 on their last drive of the game for 65 yards. 15 of those yards came from a touchdown reception for Derrick Deese, tying the game. Golden West kicker Emmanuel Cuevas was successful on his point after attempt, giving Golden West College the lead 34-33.

One minute and five seconds left in the fourth quarter. Grossmont College fans are in disparity, praying to go home on a happy note.

Grossmont started the drive on their 26-yard line. A roughing the passer penalty committed by Golden West moved the ball up 15 yards. Cagle unloaded and threw a deep ball 30 yards and was intercepted. Whistles blew and there was a lone yellow flag on the field, signaling a passing interference penalty which gave Cagle new life as well as 15 more yards. After two short completions, Steen rose to the occasion again for 32 yards. This put Grossmont in field goal range with eight seconds left at the six-yard line. An offsides penalty by the Golden West defense inched them closer to the endzone to the three-yard line. Instead of Erwin taking the PAT, Head Coach Michael Jordan sent Nels Haltom out for the win. Unphased, Haltom lined up and drilled the 20-yard field goal for the win in a thriller. Grossmont would win 36-34. Grossmont notches their fourth win of the year.