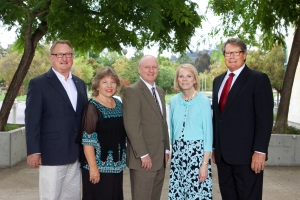 January 7, 2016 (La Mesa) -- The board of directors of the Grossmont Healthcare District (GHD) recently elected its board officers for the 2016 calendar year.

Re-elected for one-year terms were Robert “Bob” Ayres as president, Michael Emerson as vice president and Gloria Chadwick as secretary. All three served the same board officer positions in 2015, as well as a portion of 2014. Ayres began serving as GHD board president in July 2014, replacing Dr. Michael T. Long, who resigned.

“I am honored and excited to serve again as president on a board with such committed and dedicated members,” said Ayres. “We are grateful for the opportunity to serve in our role of monitoring and addressing unmet healthcare needs of the community to the greatest extent possible as we look ahead and take seriously our due diligence work on behalf of our constituent taxpayers.”

Board member Randy Lenac was selected by Ayres to serve as board treasurer for 2016. Also serving on the five-member board is Betty Stieringer.

Ayres, a retired banking executive and El Cajon resident, was elected to a four-year term in November 2012. He joined the board in December 2010 as an appointee to fill a vacant seat. Ayres has 49 years of experience in both public- and private-sector banking and construction financing and management.

Emerson was appointed to the board in 2008. He was elected to a four-year term in November 2008, and was reelected in November 2012. An optician since 1975, Emerson is a Registered Dispensing Optician (RDO) and a Fellow of the National Academy of Opticianry (FNAO). He owns Hart Optical Company and resides in La Mesa.

Chadwick has served on the board since 1998, when she became the first woman to be elected to the board in 22 years. In 2000, she became the first woman in District history to serve as board president. She was reelected in 2002, 2006, 2010 and 2014. A second generation San Diegan and resident of Dehesa Valley, Chadwick retired as a psychiatric nurse after a 44-year career of working in the healthcare profession.

Lenac, a resident of Campo, was appointed to the board in July 2014 to fill a vacancy. He was elected to the board in November 2014. Since 2011, he has served on the board of the Grossmont Hospital Corporation, a non-profit entity that oversees the management and operation of Grosssmont Hospital. Lenac has executive management experience in administration, finance and program development and strategy, including a 27-year career in the U.S. Marine Corps.

Stieringer, a registered nurse and La Mesa resident, was elected to the board in November 2012, finishing first in a field of nine candidates. Her nursing career includes service at Grossmont Hospital and at the County of San Diego’s Juvenile Hall, Las Colinas Women’s Detention Facility, and the Sheriff’s Central Detention Downtown Jail.

The Grossmont Healthcare District (GHD) is a public agency that supports health-related community programs and services in San Diego’s East County region. Board meetings are regularly held at 7:30 a.m. on the first Monday and third Friday of each month at the GHD Conference Center, 9001 Wakarusa St., La Mesa. The public is invited to attend. Formed in 1952 to build and operate Grossmont Hospital, GHD serves as landlord of the Hospital in La Mesa on behalf of East County taxpayers. The five-member GHD board represents more than 500,000 people residing within the area's 750 square miles. For more information, visit www.grossmonthealthcare.org.