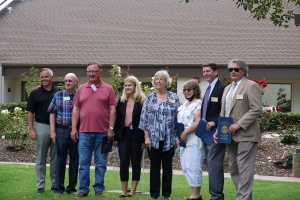 Original lease to operate Grossmont Hospital signed in 1991; voters have since extended to 2051

The original agreement was designed to ensure Grossmont Hospital would remain competitive in attracting new patients, technologies, and services in the face of a rapidly changing healthcare environment.

Since that time, the partnership has guided development and completion of several major improvements in and around the facility, simultaneously increasing quality and access to care.

“We commemorate what the anniversary of this lease truly represents for residents within our healthcare district,” said GHD board president Virginia Hall, RN. “It is clear from highlights over the last thirty years of collaboration that patients have benefited from and will continue to benefit from the resources invested by Sharp into our hospital.”

Prior to the expiration of the initial agreement, Proposition H was placed on the ballot in 2014 to ask East County voters whether the lease should be extended for an additional 30 years. At that time, 87 percent of voters backed a continued relationship with Sharp to maintain a state-of-the-art community hospital.

“The level of growth and advancement in the care we offer has largely been thanks to the support and confidence from the people of East County, and from the Grossmont Healthcare District,” said Sharp Grossmont Hospital CEO Scott Evans. “Our hospital leadership and team benefit greatly from the important oversight by the District, and we in turn are committed to providing transparent leadership on our end.”

Today, Sharp Grossmont Hospital remains one of the largest employers in East County and has invested hundreds of millions of dollars in hospital facilities, programs and equipment to best serve the community.

The Grossmont Healthcare District is a public agency that supports health-related community programs and services in East County. The District formed in 1952 to build and operate Grossmont Hospital. It serves as landlord of Sharp Grossmont Hospital and owns the property and buildings on behalf of East County taxpayers. The district is governed by a five-member board of directors who represent more than 500,000 people residing within 750 square miles.