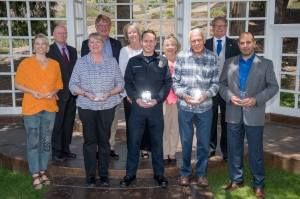 April 24, 2018 (La Mesa) – The Grossmont Healthcare District (GHD) is proud to announce the honorees for its 2018 Healthcare Heroes awards. GHD officials said the recipients are volunteers of all ages and walks of life who serve in health care in San Diego’s East Region community.

This year’s honorees include a family practice physician who helps those not able to afford health insurance, two volunteers who provide one-on-one comfort following crisis events, a 23-year-old who spends part of her weekends in a hospital emergency room, a couple who drives people to their cancer treatments and a non-profit board member who has volunteered for the past 20 years.

“The purpose of the Healthcare Heroes Awards is to recognize volunteers whose unsung work in healthcare might not otherwise be celebrated,” said Michael Emerson, GHD board president. “We are proud to recognize the 2018 winners and their inspiring commitment to caring for others.”

Here are the heartwarming stories of this year’s winners:

Dee Davis, owner of her own mechanical engineering company, travels from her home in Alpine often at night to various medical facilities in the county where forensic exams are underway with survivors of rape, sexual assault or domestic violence. In a private exam room, accompanied by healthcare and law enforcement personnel, Davis provides emotional support, counseling, advocacy and referrals to people who may be experiencing the worst day in their lives. She is a volunteer with the Center for Community Solutions of San Diego on its Sexual Assault Response Team (SART).

Rick Doremus, retired airline industry executive and San Carlos resident, has served since 1995 as a board member of the Home of Guiding Hands (HGH), an El Cajon-based non-profit that provides services, training and advocacy to people with developmental and intellectual disabilities and their families. On the HGH board, he has held every executive committee position, including board president, VP, treasurer and secretary, and served on several committees, including business management, facilities, investment and capital campaign. Doremus and wife of 56 years, Mary Doremus, have organized several HGH “Hand and Heart Gala” fundraisers. Doremus also played a key role in recruiting Randy Jones to become involved with HGH, a former San Diego Padres pitcher who now has an annual HGH 5k run-walk fundraiser named in his honor.

Shawn Kelley has owned Valley Automotive, an El Cajon auto repair shop, since 2001. Kelley provides crisis intervention following a tragedy for Trauma Intervention Programs (TIP) of San Diego. Within roughly 20 minutes of getting the call, Kelley will travel from El Cajon to the scene of a crime or tragic accident to provide compassionate support and consolation to “secondary victims,” including traumatized witnesses, friends and family members, who are suffering and need immediate help with facilitating their healing and long-term recovery. Kelley has responded to 168 crisis intervention calls since 2015; on some days, he has handled three calls during a 12-hour shift.

Ally Kellogg, age 23, works as an emergency medical technician (EMT) for a private company. She’s planning a career in healthcare, perhaps in physical therapy or as a physician’s assistant. But, on Saturdays, she volunteers at Sharp Grossmont Hospital in the hospital’s Emergency Department (ED), considered one of the busiest in the state. Her role is to calm anxious visitors whose loved ones are undergoing assessment and treatment behind the darkened glass doors. Prior to volunteering at the hospital, she found herself accompanying family members and friends to hospital emergency rooms and learned firsthand the worries and fears of ED visitors. She also trains other ED volunteers at Sharp Grossmont Hospital. Since 2015, she has logged more than 475 hours of volunteer service at the hospital. As a student at Helix High School in La Mesa, the La Mesa native volunteered more than 300 hours in the school’s sports medicine clinic as an athletic trainer.

Dr. Tryna Ramos is a family practice hospitalist -- a doctor who cares for patients admitted to the hospital -- at Kaiser Permanente’s San Diego and Palomar medical centers. She also hasvolunteered twice a month in El Cajon for the past eight years at Volunteers in Medicine (VIM), a non-profit that brings together medical professionals and patients who do not have health insurance. Ramos is among more than 100 professional volunteers, including retired doctors, nurses and support staff, who donate thousands of hours in providing primary care services to more than 2,000 patients annually at the East County VIM clinic in El Cajon. Ramos serves mostly in primary care and women’s health at VIM. She also mentors college students studying for a career in healthcare and volunteering at the clinic. Ramos also has served on medical missions to Haiti, Vietnam and the Dominican Republic.

Chuck and Jan Vermillion of Spring Valley have been married for 53 years. The retirees are both volunteers for the American Cancer Society’s (ACS) “Road to Recovery” program, which offers free rides to weekday medical appointments and treatments for someone dealing with cancer. Some rides over the past year have totaled up to 120 miles in distance. Some patients are talkative, others are contemplative and quiet, but all are grateful. Jan is a breast cancer survivor. Chuck is a retired San Diego Police Department traffic patrolman who knows well the streets and freeways in the county. The Vermillions also participate in East County’s Relay for Life, a 24-hour fundraiser featuring cancer survivors and supporters taking turns walking around a track in honor of those fighting cancer and loved ones lost to the disease, while raising money for the American Cancer Society.

Now in its 12th year, Healthcare Heroes is GHD’s annual awards program honoring volunteers helping to advance the delivery of quality health services in the East County region. Awards will be presented at a luncheon on Wednesday, May 16, 2018, at the Sycuan Golf Resort in El Cajon.