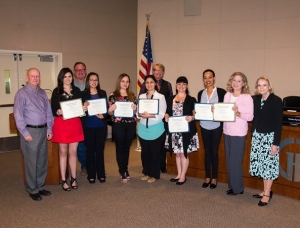 Three nursing students from Grossmont College each received a GHD Richard J. Bea Memorial scholarship, named after former GHD board member Richard Bea, a registered nurse who worked at Grossmont Hospital for 18 years. Bea served on the GHD board from 1996 until his death in 1999, including as board president.

The three nursing students included Aimee Cook, who received $3,000, and Diane Evans and Sara Shayya, each receiving $1,500 apiece. Their scholarship application included a letter of recommendation from a nursing instructor and information about community volunteer work, as well as a 500-word essay on the topic of “the future of nursing in my community.”

Cook, a nursing student since 2013, is currently serving as vice president on the California Nursing Student Association board of directors. After graduation, she plans to volunteer at the East County Pregnancy Care Clinic in El Cajon.

Evans, a nursing student since 2014, wants to help moms with breastfeeding care. Since 1997, she has worked at Sharp Grossmont Hospital as a perinatal educator. In 2001, she earned her International Board Certified Lactation Consultant (IBCLC) professional designation from the International Board of Lactation Consultation Examiners. She has three children, including two in college.

Shayya, a nursing student since 2013, has worked for the past five years at Sharp Grossmont Hospital in the stroke telemetry unit as a nursing assistant and telemetry technician. Her unit was recognized with a Sharp HealthCare Core Award for community involvement.

In addition to the three nursing students, five other college students each received a GHD Health Tech Career scholarship. These students, pursuing healthcare careers in positions defined as technicians, wrote an essay on the topic “where I will be in my career five years from now.” Each received a check for $2,000.

Scholarship recipients had to be residents within GHD boundaries or a graduate of an East County high school. Scholarships were presented at the April 17 board meeting.

The Grossmont Healthcare District, a public agency that supports various health-related community programs and services in San Diego’s East County, is governed by a five-member board of directors, each elected to four-year terms, who represent more than 500,000 people residing within the District's 750 square miles in San Diego's East County. For more information about GHD, visit www.grossmonthealthcare.org.