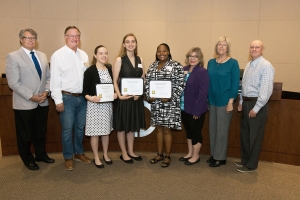 June 19, 2018 (La Mesa) – The Grossmont Healthcare District (GHD) has announced the recipients of two 2018 GHD scholarship programs, one for nursing students and another for students pursuing careers as medical health technicians.

“Our board of directors have made a long-term commitment to provide scholarship opportunities to students pursuing nursing and health tech careers as part of our mission in East Region communities,” said Michael Emerson, board president. “It’s important for us to invest in access to education and training programs in the healthcare field, with the goal of serving in tomorrow’s workforce. We look forward to these students’ future successes.”

The nursing scholarship, called the Richard Bea RN Memorial Nursing Scholarship, is named after former GHD board member Richard Bea, a registered nurse who worked at Grossmont Hospital for 18 years and served on the GHD board from 1996 until his death in 1999. Applicants for the nursing scholarships are required to provide evidence of current enrollment in a registered nursing program approved by the Accreditation Commission for Education in Nursing (ACEN), along with details about community volunteer work, a letter of recommendation from a nursing instructor and a maximum 500-word essay on the topic “the future of nursing in my community.” 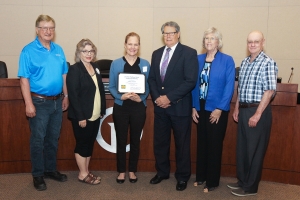 Two Grossmont College nursing students were selected for the GHD nursing scholarships. They included Sarah Barisic and Sofia Grant, both of El Cajon.

Barisic, recipient of a $3,000 scholarship, currently works as a certified nursing assistant at various local facilities operated by Scripps Health. She has volunteered at blood collection drives held at Grossmont College and at North County Stand Down, an event that offers free services to homeless veterans.

Grant, recipient of a $1,500 scholarship, has volunteered more than 336 hours since April 2016 at Kaiser Permanente in the Neonatal Intensive Care Unit. She also has volunteered at Grossmont College in maternal-newborn classes and has tutored immigrant and refugee students.

Five students pursuing careers as medical health technicians each received a $2,000 scholarship. Applicants for the health tech scholarships were required to write a maximum 400-word essay on the topic “where I will be in my career five years from now.”

The students include: Kira Bunker, a graduate of Mount Miguel High School in Spring Valley who is now enrolled in a radiology tech program at California State University Northridge; Brenda Johnson, who is studying to become a pharmacy technician; April Streeter, a graduate of West Hills High School in Santee who wants to work as a licensed vocational nurse; Ophelia Williams of El Cajon, a pharmacy technician student; Marti Wilmot of Lakeside, also a pharmacy technician student. Johnson, Streeter, Williams and Wilmot all are students at the Grossmont Health Occupations Center (HOC) in Santee. HOC is operated by the Grossmont Union High School District’s Grossmont Adult Education program.

Health technicians serve in a variety of specialized support roles in the healthcare field. According to the Association of Schools of Allied Health Professions, between now and 2020 the demand for healthcare workers, such as health technicians, will grow nearly twice as fast as the national economy.