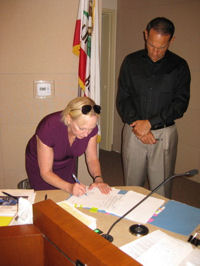 July 8, 2012 La Mesa) -- The Grossmont Healthcare District (GHD) board of directors on Friday, June 29, 2012, unanimously approved plans to greatly improve energy efficiency and reliability at Grossmont Hospital in La Mesa.
The GHD board approved financing and a purchase agreement that will replace decades-old equipment with new, state-of-the-art cogeneration energy equipment at the regional medical facility. Estimated to cost $18 million to install, the hospital’s cogeneration project is projected to save millions of dollars in energy costs and provide a reliable source for up to 95 percent of the hospital’s electricity needs, GHD officials said.
Grossmont Healthcare District 2012 board president Debbie McElravy
and Tom Saiz, GHD chief financial officer. Credit Courtesy GHD
“We are very excited to take this important step that will provide a safe and reliable energy source for patient care and, at the same time, protect the environment,” said Debbie McElravy, GHD 2012 board president.
Cogeneration burns natural gas through a turbine generator creating electricity. The heat from the generator is converted to steam which also is used to power equipment, including air conditioning. In addition to energy efficiency, the hospital’s cogeneration equipment will reduce energy costs and the hospital’s emissions of harmful greenhouse gas pollutants by 90 percent.
Built by Solar Turbines of San Diego, the hospital’s cogeneration equipment will feature emergency generators, chillers powered by both steam and electricity, a heat recovery steam generator, related cooling towers, boilers, and medical gas equipment.
Installation of the cogeneration equipment is expected to begin in July as construction proceeds on a new 18,000-square-foot Central Energy Plant with equipment that will help meet all future energy needs of the hospital. The cogeneration equipment will be part of the Central Energy Plant building to be located in a southeastern portion of the hospital property where a parking lot previously existed. McCarthy Building Companies was recently awarded a $34 million contract to build the Central Energy Plant.
The Central Energy Plant is one of several hospital improvement projects being financed with a $247 million bond measure called Proposition G that East County voters approved in 2006. However, the cost for the new cogeneration equipment is not part of the Prop. G-funded construction. Rather, GHD is borrowing $18 million to add the cogeneration equipment to the Central Energy Plant. The $18 million, nine-year loan from the Royal Bank of Scotland (RBS) has a tax-exempt interest rate of 2.09 percent. GHD CEO Barry Jantz said loan payments to RBS will be made by Grossmont Hospital Corporation, a non-profit entity that operates and leases the hospital from GHD to Sharp HealthCare of San Diego. The 30-year lease with the District expires May 2021.
The Grossmont Healthcare District, a taxpayer-supported public agency, supports health-related community programs and services in San Diego’s East County. Formed in 1952 to build and operate Grossmont Hospital, the District serves as owner and landlord of Grossmont Hospital, including ownership of the property and building.  The District’s five-member board, each elected to four-year terms, represents more than 500,000 people residing within the District’s 750 square miles. For more information about GHD, visit www.grossmonthealthcare.org.