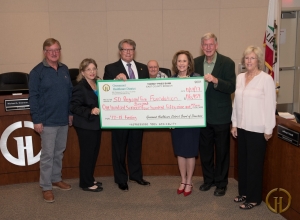 November 20, 2017 (San Diego’s East County) -- The Grossmont Healthcare District (GHD) is continuing its support of the San Diego Regional Fire & Emergency Services Foundation (Fire Foundation) with a $116,459 grant for mobile data computers (MDCs), which will provide address and mapping information to first responders during medical emergencies and brush fires in rural back country areas of the county.

“We’re proud to support the efforts of the Fire Foundation and help first responders reduce response times and strengthen the system of fire and emergency services to our District residents,” said GHD board president Michael Emerson.

“Timing is most critical in treating an individual who has suffered a serious health issue, seconds matter and can affect the patient’s survivability and quality of their recovery,” said Gloria Chadwick, GHD board member and chair of the GHD Grants Committee. “Our support will enable first responders to get to the scene of an emergency more quickly, with location information that current county mapping doesn’t provide for rural areas.”

“Urban fire departments have MDCs in their response vehicles, but rural fire departments do not,” said Frank Ault, chairman, Fire Foundation. “Today, our first responders in rural areas do not have access to maps or data once they leave the fire station, which can cause critical delays in getting to the scene of an emergency on unmarked backcountry roads. We’re grateful for the support of the Grossmont Healthcare District to help improve the system of fire and emergency services in San Diego County.”

“Having this information readily available on response vehicles will reduce response times and enable first responders to start medical treatment for patients more quickly and to stop fires while they are small,” said Chief Tony Mecham, Cal Fire/San Diego Fire Chief. “Quickly controlling fires can help avoid the firestorms like we experienced 10 years ago in San Diego or most recently in Northern California.”

This grant is part of a $530,000 project to provide mobile date computers and mapping information for 70 fire and rescue vehicles in 42 stations in San Diego’s rural areas. “Including this grant covering vehicles and stations within GHD’s service area, 65 percent of the funds have been raised for the project, leaving $180,000 needed to complete a countywide effort,” said Joan Jones, Fire Foundation Executive Director.

GHD has supported the Fire Foundation with grants since 1998.  GHD grants have helped pay for fire rescue and safety equipment and medical equipment, including medical supplies used by volunteer firefighters at rural fire departments.

Founded in 1989, the Fire Foundation has provided more than $5 million in medical, fire, and communications equipment and training to County fire agencies to improve the system of fire and emergency services. The non-profit Fire Foundation said rural fire departments serve more than 60 percent of San Diego County and respond to more than 6,000 emergencies annually. More than 80 percent of these emergency calls are medical related.