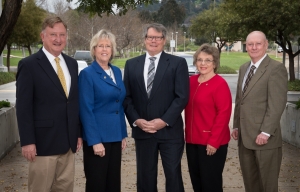 January 15, 2019 (La Mesa) – The Grossmont Healthcare District (GHD) board of directors has elected its 2019 board officers.

“I’ve served on this board since 2014 and I’m continually impressed with the collective wisdom and selfless dedication of my board colleagues to serve the taxpayers in our district,” said Lenac. “Every constituent can feel confident that this board is committed to our role of addressing unmet healthcare needs and supporting the community to the greatest extent possible.”

Lenac, a resident of Campo, was appointed to the GHD board in July 2014 and elected to a four-year term in November of the same year. In November 2018, he was reelected. Since 2011, Lenac, a retired Marine, has served on the board of the Grossmont Hospital Corporation (GHC), the operator of Sharp Grossmont Hospital. He also represents GHD on the Association of California Healthcare Districts board, a statewide organization representing healthcare districts.

Hall, a retired registered nurse, was elected to the GHD board in November 2016. She worked in healthcare from 1973 to 2004, including at several hospital emergency rooms, clinics and research facilities. Since 2004, Hall has worked in real estate and has been active in the Santee community, serving as 2016 president of the Santee Chamber of Commerce.

Ayres, a retired banking executive with more than 50 years of experience in both public and private-sector banking and construction financing and management, joined the GHD board in 2010. The El Cajon resident has been twice elected to four-year terms, in 2012 and 2016.