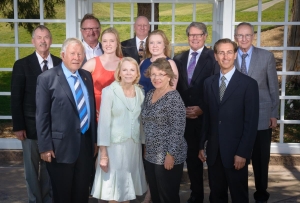 June 12, 2015 (San Diego's East County) - An eye surgeon, a retired physician, twin sisters, a parent of adult children with disabilities and the first male president of a hospital’s auxiliary were among local volunteers recently recognized with 2015 Healthcare Hero awards from the Grossmont Healthcare District (GHD). Now in its ninth year, the Healthcare Heroes is GHD’s annual awards program that honors volunteers who help advance the delivery of quality healthcare in the East County region.

“The purpose of these Healthcare Hero awards is to recognize volunteers whose unsung work in health care might not otherwise be recognized,” said Grossmont Healthcare District 2015 board president Bob Ayres. “This year’s group of honorees demonstrated extraordinary and inspirational care and selfless dedication that has played a critical role towards a healthier East County community.” This year’s honorees included:

-- Dr. Andrew Alongi of San Carlos, a retired physician and member of the La Mesa Lions Club, volunteers with International Catholic Families at Our Lady of Grace Catholic Church in El Cajon. Specializing in internal medicine and geriatrics, Alongi, 71, provided for the health care needs of East County residents for four decades until his retirement in 2014. From 2009 to 2013, he volunteered at the El Cajon clinic of Volunteers in Medicine, a nonprofit that brings together medical professionals and patients who do not have health insurance.

-- Anjelika Cannon and Veronika Cannon of El Cajon have volunteered about 1,500 hours together at Sharp Grossmont Hospital since June 2012 at the end of their ninth grade year at Steel Canyon High School. Now in 12th grade, the twins help train new junior volunteers and participate at the American Heart Association’s Heart & Stroke Walk. They were adopted at age 4 in September 2011 by Amy and Dan Cannon from an orphanage in the small Russian city of Kudymkar, near southwestern Siberia.

-- Michael Dutcher of San Diego is a volunteer at Noah Homes, a residential community in Spring Valley for adults with developmental disabilities. He began volunteering at Noah Homes in 2010 after his daughter Jane had moved there (she now lives at another facility). Michael’s son Tommy has lived at Noah Homes since 2009. His service includes escorting residents on field trips, assisting with on-site activities and picking up donated home goods. The 79-year-old was named Noah Homes’ 2014 Volunteer of the Year.

-- Richard Hart of La Mesa has volunteered more than 4,500 hours at Grossmont Hospital during the past 11 years. The retired high school teacher (he taught English and Social Studies at El Cajon Valley High School for 38 years), served as president of the Grossmont Hospital Volunteer Auxiliary in 2011 and 2012. He will forever be known as the Auxiliary’s first male president since the Auxiliary was founded in 1952, prior to the hospital’s opening in 1955. Today, Hart, 72, serves on statewide committees with organizations that represent more than 100,000 hospital volunteers in California. His father, Benton Hart, also worked for the Grossmont Union High School District serving as Helix High School’s first principal from the first day of school in 1952 to 1975.

-- Dr. David J. Najafi of San Diego is a practicing vitroretinal surgeon with a private practice based in La Mesa called Alliance Retinal Consultants, Inc.  Since 2010 as a volunteer physician for Project Access San Diego (PASD), he has helped restoring and preserving the gift of eyesight to uninsured or under-insured East County residents who cannot afford specialty surgeries. He donates one or more surgeries nearly every month at various surgical centers in San Diego and La Mesa. His patients suffer from diabetic retinopathy, ocular tumors and other diseases of the eye.