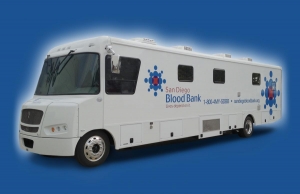 May 11, 2015 (San Diego) - The San Diego Blood Bank (SDBB), the primary supplier of blood to the majority of hospitals in San Diego County, will introduce their newest blood mobile with a ribbon cutting ceremony at 10 a.m. Wednesday, May 13, at Rady Children’s Hospital-San Diego, 3020 Children’s Way, San Diego.

The cost of the vehicle was $258,000, and fundraising efforts took about one year. It is replacing a 1995 model with 151,000 miles. “Literally, thousands of donors from every area of San Diego County have made a donation on that bus, but the time has come to replace it,” said David Wellis, SDBB CEO.

The new 40-foot-long blood mobile, with an expected life of about 15 years, is built on a Freightliner MT-55 chassis. Its 6.7 Cummings turbo diesel engine is compliant with California Air Resources Board (CARB) tier level 4 standards. The eight-bed interior is designed by La Boit Specialty Vehicles.

SDBB said its fleet of nine blood mobiles account for nearly half of all blood donations collected throughout the region at a variety of San Diego County locations. SDBB also operates six local donor centers in the county.

“We are extremely grateful to our donors who come out to donate on our mobiles when a donor center isn’t convenient, and we are grateful to the people and foundations who make the purchase of a new bus possible,” said Wellis. “Rady Children’s Hospital, San Diego, has hosted many drives over the years and we are happy to be presenting the bus on their campus.”